A 21-year-old Santa Barbara man, missing in the mountains above North Lake, walked out in good condition even as search and rescue teams scoured the area to find him. 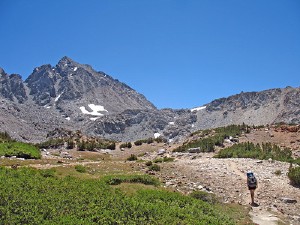 Inyo Sheriff Lt. Keith Hardcastle said that Inyo assisted Fresno County in the search for Adam Johnston who had gone hiking with his father. They planned to hike up from North Lake to Piute Pass last week and then head to Pine Creek Pass. They became separated at Piute Pass.

That’s when Fresno started to search and so did Inyo. Lt. Hardcastle said that Inyo search teams helped Fresno with trail clearing for two or three passes. The main focus was Piute Pass. He said after it was determined Adam was still in Fresno County, Inyo had done its job.

Hardcastle said word came in that Adam Johnston had contacted vacationers in the Humphreys Basin. They pointed Johnston on his way but called authorities. Adam was then spotted coming out on the trailhead at North Lake. Hardcastle said he was in good condition and did not need any medical attention.

We work to provide daily news to all of the Eastern Sierra, in the tradition of Eastern Sierra News Service and the Sierra Wave. We bring you daily happenings, local politics, crime, government dealings and fun stuff. Please contact us.
View all posts by News Staff →
Narcotics Agents Arrest Two June Lake Residents
Ownership Change Could Lead to Expansion at Mammoth Geothermal Plants