By News Staff on November 24, 2014 in Government Agencies/Utilities

During the month of November an internal audit was concluded of the inmate welfare fund by Inyo County Sheriff’s personnel. The inmate welfare fund includes revenue generated from inmate commissary and inmate phone services; the audit revealed a monetary discrepancy totaling approximately $13,000. 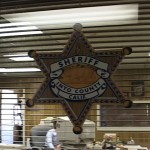 The Sheriff’s Office immediately contacted the Inyo County District Attorney’s Office for a thorough investigation, which is currently ongoing. One Correctional Officer was immediately placed on administrative leave, and the process of termination has begun. The missing funds are directly related to revenue generated from the inmate store, and at no time were any accounts of incarcerated persons affected.

“As Sheriff of Inyo County I am responsible for the accountability of my staff and to ensure the public trust, and I accept full responsibility,” stated Sheriff Bill Lutze. “I will do everything in my power to ensure that justice is carried out for the citizens of this county, and I assure you that this fraudulent behavior will not be tolerated. This incident does not reflect the professional standards of the men and women of the Sheriff’s Office.”

The Sheriff’s Office will continue to make details available as they become known and the investigation concludes.

Shouldn’t this person be in jail and not on administrative leave? If it was anyone else they would of been arrested.

How does this NOT reflect the standards of ICSO? Do tell

meanwhile the jail and court will be overcrowded with non violent drug/alcohol offenders, people who have been caught driving w/o a license and what not and armed robbers and rapists will be out on bail.

so i have made two previous posts both were waiting for moderation? freedom of speech?

Fraud is a big problem in Inyo county. Unfortunately it is widely practiced in other places in the Owens Valley. The court house, hospitals, and a lot of other institutions where it should not. I noticed my other post got deleted . Knowledge is power. Stop corruption locally. Big problem… Read more »

What posts have been deleted? BK

How many cases still remain on the docket?

Embezzlment in Inyo County….First it was the Bank…then it was the Welfare Dept., and now it’s the Sheriff’s Dept. ? What in the hell is going on up there ???

The middle class has been trickled down to third world wages. We now have the privilege to even pay for our own benefits. It’s sad!

Just bringing back the good old days of 1927 when all five county banks collapsed from embezzlement.

Pedro: 1927 was at the start of the Great Depression. Those local banks were not the only banks to fail.

The Roaring Twenties were just showing slowing down in 27 Stock market didn’t crash until 2 years later. Local bankers were charged and convicted of embezzlement . http://archives.chicagotribune.com/1927/08/14/page/3/article/owens-valley-bankers-held-as-embezzlers Study up folks.

Pedro: From 1926 to 1928 there were over 2000 bank failures. Some think the Stock Market Crash of Sept. 1929 was a symptom of deeper economic problems. I’m not an economist so I’ll not argue this any further.

That’s a good article Pedro. Almost 90 years later the banks and DWP are still getting away with the same bull!

Still don’t think the local embezzlement helped. Entire accounts were gone with the funds from land sales to LA.

Wonder how long this has been going on?

Mark….How do you know it’s fraudulent behavior prior to a full investigation ?…..My bet is,with this sort of announcement,there’s more evidence to it than being released to the public about it at this time….and rightfully so.

How do you know it’s fraudulent behavior prior to a full investigation? Might just be an accounting error.