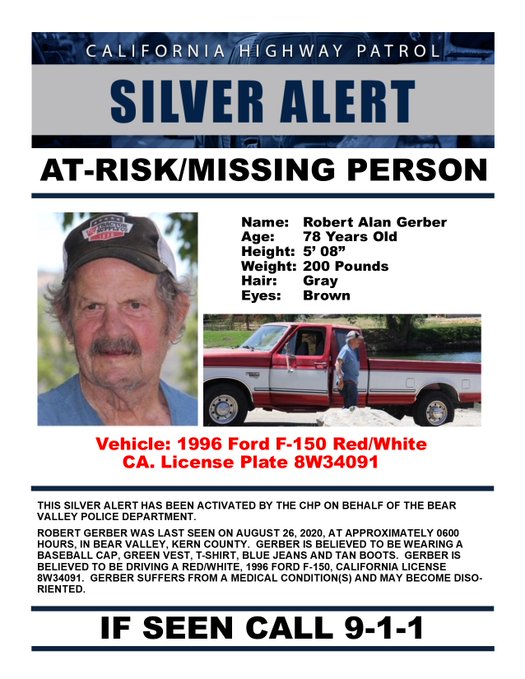 Sierra Wave has been following this story since Saturday afternoon on hearing that a body had been found in the south county, but withheld the story until “official” notification could be given the family of the victim, Robert Alan Gerber, a man reported missing since Wednesday through the CHP Silver Alert.

Mr. Gerber was known to suffer from a medical condition and could become disoriented, which prompted concerns about his going missing.

Our condolences go out to Mr. Gerber’s family and friends.
The following press release that was posted this morning from the Chief of Police, Tim Melanson, of the Bear Valley Police Department, August 30, 2020:
Missing Person Update: During the morning hours of August 29, 2020, citizens located the pickup truck belonging to Robert Gerber, a 78-year-old missing person from Bear Valley Springs, located in a remote area in Inyo County.
The truck was found abandoned and shoe tracks indicated Mr. Gerber had left his vehicle on foot in a northeasterly direction through the desert.
Following a search of the area, Inyo County Sheriff’s deputies located a deceased male in the desert. The body was identified as Mr. Gerber. Inyo County Sheriff’s deputies are conducting an investigation.