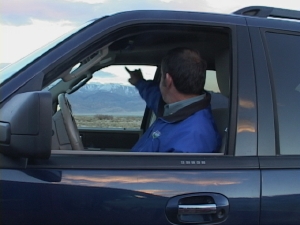 Inyo Sheriff Bill Lutze pointed to the plane crash site at the edge of the dry lake. 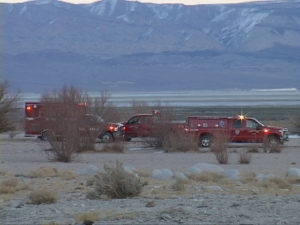 Just before 4pm Thursday afternoon, several people saw a jet plane crash into the Owens Dry Lake. The pilot ejected and walked away.

The crash site was near the old PP&G plant about five miles south of Lone Pine. Reports said the plane went down about a quarter of a mile east of the plant in the lake bed. Officers said the pilot was seen walking with his parachute and appeared to be okay. Right after the crash there was a military aircraft circling over head. It was reported as a naval aircraft. 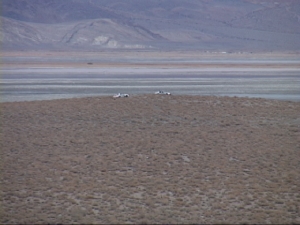 The Inyo Sheriff’s Dispatcher said he received numerous calls from people who saw the crash – from motorists and local residents. Early reports indicated explosive ordnance may have been aboard the crashed jet. Initially authorities thought the plane was from China Lake Naval Weapons Center. Later a call indicated it was an Air National Guard plane.

Inyo Sheriff Bill Lutze advised officers to let the Navy handle the wreck. There was reportedly some fire confined to the plane that went out. The aircraft itself was not accessible by vehicle, but the Sheriff’s Department stationed patrol cars nearby to the secure the area.

The pilot did go to Southern Inyo Hospital with some complaint of back pain. It was not immediately known why the plane went down. The Eastern Sierra is part of a larger military controlled air space in which jets regularly train. This is not the first crash in the dry lake- Owens Valley area.

dont forget all your tax dollars that went up in flames

There was a F16 from the Air National Guard that crashed almost in the same spot on January 19th of 2007. The pilot ejected and was okay also.

Maybe the Air National Guard planes should get better maintenance.

I guess the pilot should thank DWP for keeping the lake dry for him.

It seems to me like the ejection disoriented him. He should have stayed near the aircraft because of the emergency locator beacon. Training areas are over deserted areas like this for a very good reason. We flyboys have a saying: What is worse than your plane falling out of the… Read more »

He had his own locator, and when you eject like that you come down where your chute brings you, it never is right at the impact site.

Yes, pilots that eject are almost always disoriented. Ejecting in a rocket powered seat causes a loss of blood flow to the brain. Those seats can reach two hundred miles per hour in just a few seconds.

The pilot will have an emergency locator transmitter on his person that he can activate manually or it will activate on contact with salt water. Over land you do not necessarily want your ELT to activate. There might be bad guys lurking about trying to capture you. You will keep… Read more »

Thank your son for me. We called in the whereabouts of the pilot but couldn’t get to him. We were appalled that none of the response vehicles (including ambulance or CHP) even tried to go to him. Instead they stayed on the hill or went to the crash site. They… Read more »

Don’t know all the details, but do know some of the emergency vehicles got stuck in the very loose and sandy soil around the dry lake.
Benett

Since a military aircraft was involved we’ll never see an NTSB report on the crash.

It’s a good thing that lake is there for these guys to crash into…. And a good thing for them it’s empty I suppose….