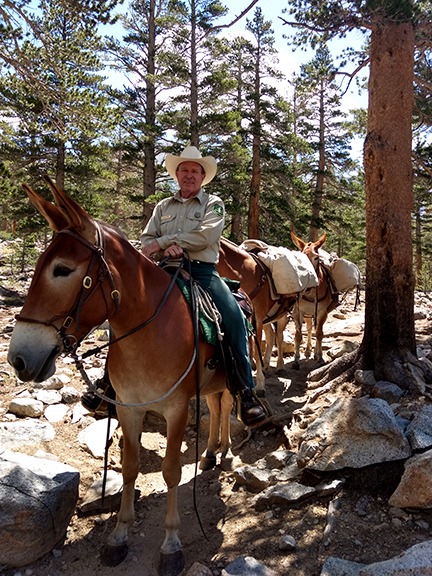 WOODLAKE, CA – The National Forest Recreation Association (NFRA) is very proud to announce that  has been selected as the 2020 ‘Ranger of the Year.’ Michael is the Co-Director of the Region 5 Pack Stock Center of Excellence; a Special Uses Permit Administrator; and the Wilderness and Trails Supervisor on the Mammoth Ranger District, Inyo National Forest He is a man of many talents and highly deserving of this award.

Michael’s nomination came with a compelling letter from the Regional Forester of the Pacific Southwest Region, Randy Moore. “I’m delighted to send this letter supporting Michael Morse’s nomination for “Ranger of the Year.”

His work exemplifies the spirit of collaboration and shared stewardship that are the pillars of the National Forest Recreation Association” stated Moore. “Michael understands the important role of partners and working together to meet shared stewardship goals… Through these partnerships, the Forest Service has been able to accomplish more than we ever could on our own.”

Michael has had a 40+ year career with the Forest Service. He was one of the primary proponents of the Region 5 Pack Stock Center of Excellence which has partnered with organizations like the Backcountry Horsemen of California, American Conservation Experience, Student Conservation Association, CCC’s and others to accomplish trail projects, bridges, and equestrian campgrounds on Forests throughout California. The program provides support to fire crews in wilderness areas, packing in food, tools, equipment and more. Such traditional means of fighting fires has earned Michael’s team, along with the hardworking firefighters they serve, entries to the Tournament of Roses Parade in Pasadena (in 2015 and 2019). 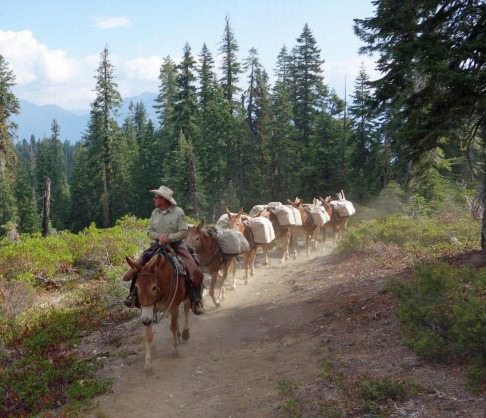 Michael’s program has established a model for preserving and continuing the historic and traditional skills of packing. Innovative approaches include an internship program to teach and train college age youth to learn about packing, and caring for stock in the mountains. Other projects include classes to educate other Forest (and BLM) employees on the skills of stock and packing in Wilderness – like the original rangers of the early 20th century!

Michael has always been committed to providing a well maintained trail system for the public, including those who use pack and saddle stock. He has been effective in finding ways to accomplish trail maintenance even when budgets have been tight. Lloyd Erlandson and Jamie Wilson, President and Vice President of the Backcountry Horsemen of California, also supported Michael’s nomination for this award. “I believe he is the reason stock users are welcomed on our public lands in the Sierra” stated Wilson. “His creation of the Stock Center for Excellence in Region 5 has allowed both agency folks and private stock users excellent training in wilderness ethics and safe use of equines on public lands… Michael always seems to find a way to get it done.” A maintained system of wilderness trails is critical for users to have a wide array of recreational opportunities. Michael has been diligent to not let trails deteriorate, thereby keeping alive the unique trail system intended by the Wilderness Act.

With his responsibilities as a Permit Administrator, Michael also works to convey the needs of the commercial packers with Forest and Regional level decision makers. He understands the valuable and historic services the packers provide, enabling the public to visit and have a true wilderness experience.

Michael was nominated by Jen Roeser, who has known and worked with him throughout his entire career. “Michael’s integrity and passion for his many responsibilities is why he is deserving of this recognition,” stated Roeser.

“He goes above and beyond in everything he does and is truly a credit to the Forest Service.” NFRA’s President, Warren Meyer, congratulates Michael on his exemplary leadership and innovation. “

His commitment to the many partners he works with, including many NFRA members, is greatly appreciated and it is an honor to recognize him for his dedication and outstanding service,” stated Meyer. Michael will be honored at an awards ceremony at NFRA’s Annual Conference, February 24, 2021.

NFRA’s ‘Ranger of the Year’ Award has been presented annually since 1982 to individuals who show personal dedication in the realm of recreation management and exhibit a true sense of partnership with recreation service providers.