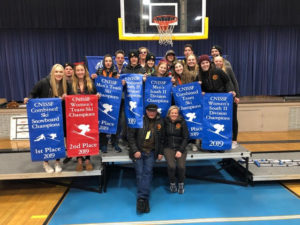 At the California Nevada Interscholastic Ski and Snowboard Federation Championships held at Mt. Shasta, CA on March 4-7, over 300 athletes competed from 27 different high schools.  Mammoth came out on top of the podium by a close 13 points.  Last year, MHS dominated by a much further spread of close to 300 points.
With challenging wet weather conditions persisting at the games, the 4 days of racing consisted of giant slalom and slalom events for both snowboarding and skiing.
The team is coached by Director Connie Moyer, Jimmy Morning, Emma Romo and Justin Lind.
The snowboard events were first with Mammoth’s Nick Hildebrand earning a 5th in the GS and 7th in the combined overall and Andrew Gray earning a 10th place medal in the SL.   This gave the MHS Snowboard men a combined overall second place by a mere nine points, setting-up the skiers for a win. 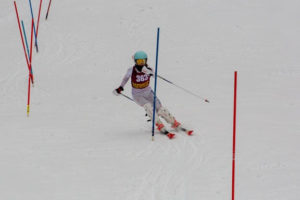 In the skiing events, Mammoth High School’s Kendall Lach dominated with a 1st place in the giant slalom (beating all but one man) and 2nd in the slalom giving her the tie for first place overall standings.  Other women who earned medals were Keely Podosin, 6th in the slalom and 8th overall; and Hallie Clute with an 8th in the slalom.  This inched the girls overall title into second position to the Colfax High School Ski Team by a close seven points.
The Mammoth High School men skiers locked-up the title for the team with Aidan LeFrancois placing 1st in the slalom, 2nd in the GS and tying for the combined overall title. Mammoth’s Iain Ferguson place 3rd in the GS, 6th in the Slalom, which gave him a 3rd place combined overall standing. Benny Wolfe earned a 10th place medal in the GS, 4th place in the slalom to give him a fourth place combined overall standing.  Sean Walker was awarded the 5th place medal in the GS.
Congratulations to this amazing team for this huge accomplishment.  The new championship banner will hang proudly in the MHS gym for years to come.