By News Staff on November 14, 2013 in Government Agencies/Utilities 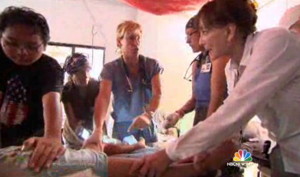 On Wednesday, NBC Nightly News featured Mammoth Medical Missions, founded in Mammoth Lakes, as they continued with the harrowing work of performing surgeries and other procedures to help the scores of injured and ill in the Philippines.

The team was headed to work in Mexico wwhen the huge typhoon hit the Philippines. They changed plans and headed to the area of devastation. Just getting there and getting back out is a tough job. The group of some sixteen doctors and other personnel had set up a MASH unit or mobile surgical unit last week. Their location was in a nearly demolished city hall in a small town south of the capitol, Tacloban.

Another storm moved in and made everything more difficult. Dr. Mike Karch of Mammoth Lakes is heading the effort. His wife, Dr. Kim Escudero of Mammoth said the team is expected to leave on Friday. They were running out of supplies, but kept up the work with help from Team Rubicon of Los Angeles. Dr. Escudero said she’s calling them Mammoth’s Sister Team.

Escudero said Rubicon arrived the same day as NBC television crews. Dr. Nancy Snyderman flew by helicopter to the small and completely destroyed town of Tanauan, south of Tacloban. She went to the makeshift clinic set up by Mammoth Medical Missions. Snyderman reported that getting around is a big problem and that the survivors await air drops of food and water.

At the clinic, NBC reported that doctors were using desks as operating tables and flashlights to illumine their life-saving work. Dr. Snyderman said the work is non-stop and that doctors had not slept for four days. They were running out of antibiotics and wound dressings.

Dr. Escudero, who has communicated with her husband, Dr. Karch, via satellite phone, said the Mammoth Team is doing okay under extremely difficult circumstances. Escudero said she was not sure of the exact itinerary of the Mammoth Team but hopes they will make it back to LAX by Saturday.

Auxiliary to Help in Relief Effort for Philippines Devastating Typhoon

Mammoth Hospital Auxiliary President, Judy Bornfeld, announced that the Auxiliary has pledged all Cast Off proceeds for the next three Saturdays, November 16, 23 and 30, will go to Mammoth Medical Missions to assist with their Philippine relief effort.  In addition, the Auxiliary will match total sales for these three Saturdays, thereby doubling the amount going to them.

Mammoth Medical Missions is a non-profit volunteer organization based in our own town.  We are very proud that they were the first medical relief team to arrive in the Philippines after the devastating typhoon.  Their expenses are enormous and are currently being paid for personally by the members of the team.

Please show your support for them and their humanitarian efforts by shopping at the Cast Off the next three Saturdays.  If you would like to make a donation beyond your purchase, please put it in the donation jar at the Cast Off or give it to one of the volunteers.  Checks should be made out to Mammoth Hospital Auxiliary and marked “For Philippine Relief.”  You can also donate directly to Mammoth Medical Missions by going to their website at:  www.mammothmedicalmissions.org/donate.

Let’s empty Cast Off and ask MMM to go back. Will try to do all Christmas shopping there.
Would like holiday card with a photo of the good work to let my family know I’m giving additional donation in their name also.

time to focus on our own rotting country

Yes, but big part of healing yourself is helping others heal.

I was thinking something similar. We send people and aid all over the World at great expense of time and effort and compassion but if we try to help our own people — like with the ACA — then people start shouting about socialism and welfare and government takeovers and… Read more »

Wow. Incredible human beings with enormous giving hearts. Talk about sacrifice. Just wow, man. I don’t know what else to say. I am truly humbled.
I will most likely fail but I am going to try to be less cynical from now on.

I was so relieved that your medical team not only reached Leyte, but went directly to my hometown of Tanauan to help treat the many of my townspeople who were injured. Your team’s decision to go there, knowing that it was one of the first isolated towns impacted by the… Read more »

Thank you so much for your untiring service to the people in Tanuan,Leyte Philippines,i am so touched and was very moved when I saw ,what you have done to thevictims of typhoon,so grateful that some people really care.God bless you all,!!