By News Staff on February 16, 2012 in Government Agencies/Utilities 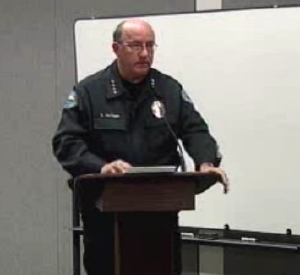 Mammoth Police Chief Dan Watson said for now the town has one dispensary to serve the public.

In 2010, Mammoth Lakes voters said yes to medical marijuana co-operatives in town.  In 2012, a federal crackdown led to the closure of one of Mammoth’s two co-ops.  Now, the police chief reports that the status of medical marijuana has turned into a temporary moratorium.

Mammoth Police Chief Dan Watson stood up at Wednesday night’s Town Council meting to update the Council and public on medical marijuana.  Watson reviewed the process that led to establishment of two dispensaries in Mammoth.  He repeated the news that when it came time for the co-ops to renew their permits, one of them didn’t.  Green Mammoth closed its doors.  Owner Steve Klassen had expressed concerns for the considerable crack down on marijuana dispensaries by U.S. Attorneys.

Chief Watson said that the Community Development Department and the Police Department have been approached by two parties to take over the vacant permit.  The Chief said that for a number of reasons, there is now a temporary moratorium on co-ops in Mammoth.

Chief Watson said state medical marijuana laws are in flux and “a number of things could change.”  He named three cases pending, including one on the Long Beach marijuana ordinance which, Watson said, is similar to Mammoth’s.  The fact that the U.S. Attorney’s office has stepped up its examination of California’s medical marijuana situation could also impact things statewide.

Watson said the federal lawyers are focusing on large scale operations, but what they do could change things for all.  The Chief added that California Attorney General Kamala Harris has also said she will issue no new medical marijuana guidelines but will leave the issue to the courts or legislature.

So, Mammoth still has one permitted co-op, Mammoth Wellness, where, the Chief said, those with cards can get what they need.  For now, that’s all Mammoth will have.

HATERS>>> My wife has a card and got off the $1200 month scripts here doctor was killing her with.

I wonder how many off you are dying from the crap your doctor wants you to take, but that is ok. Yikes I call that hypocrisy.

Wayne-you sound like you work for Nacey Reagans just say no program.Lighten up, this is a ski resort town.

Trouble…This is the last post I will make on this story… you,and others might find this hard to believe,but there are people that accually can go skiing and snowboarding, and not have to be doing drugs to enjoy it in a ski resort town…in fact,I bet there is quite a… Read more »

Trouble .. so because it is a ski resort, that makes everything OK? Oh I get it .. the customer comes first. LOL .. on the light side.

I guess he is putting a halt, to wait and see if councel can override the law a majority of citzens voted for. WTF… is the Government not supposed to be working for the people? But I guess Dan Watson knows just like the chief before him, what is best… Read more »

iguess…You have got to understand….Chief Dan Watson and his officers got to deal with those kind of people on a daily basis….druggies,drunks,bar-fights,dope dealers,etc.Which does make it seem he knows what is best for Mammoth Lakes.Like I have said before,if it were put to a vote in Mammoth Lakes,drinking age would… Read more »

lets stop acting like marijuana isnt already readily accessable to those that want to use it, so stop sending those non criminals to jail and legalize it, then in turn the cops can focus on what is more important. oh wait cops around here need all they can get!

No they don’t need to legalize it. while legalizing it is a tasty idea for a lot of people, it would open up a whole can of worms. Not so tasty. It wouldn’t really make that much of tax increase, because like anything, people will find ways not to pay… Read more »

Big Al, do you think prohibition of alcohol is a good thing? I don’t see a difference. In fact I believe marijuana is much less harmful and sometimes helpful. I haven’t tried any in years but don’t want to see people put in jail for doing something as harmless as… Read more »

I honestly don’t think we should legalize it Trouble, that’s just my thought on it. Yes it does have medicinal, there is no doubt in my mind. but the fact remains, it does impair you. It might be less of an impairment than what alcohol will do to you, but… Read more »

Trouble…I think your credibility went down the drain on this subject when you stated the seniors at the high school should vote on growing marijuana on campus,kidding or not….

wayne- that was a joke on a story about propane tanks. I thought it was funny- still do. Besides I said herbs, you said marijuana. Shame on you 🙂

Big Al……You are so correct with what you say…Those saying to legalize so the state can tax it,and fix the California budget is the same kind of feel-good logic they used when pushing for MMJ…a compassionate thing to do for people with serious illnesses…only to later find a way to… Read more »

Wayne, next time you come into Mammoth, go into 420 Mammoth and tell them you have a sore toe. I bet the pot doctor will give you a card.

If someone held a large caliber pistol to my head and told me I had to come to Mammoth Lakes,sore toe or not,wouldn’t go anywhere near 420…..I don’t want to be around that place when the Fed’s come crashing down doors someday.

Josh-one of the good things about this country is bad laws can be changed. Ever hear of prohibition? This is clearly the same thing.

This medical mumbo-jumbo stuff is garbage. Stop all the bull and legalize it .

We (Ca.) need to vote on totally legalizing it, tax it and challenge the feds to stop it.

Yeah,the rest of the state of California can use TOML as an example…. since they do such a good job of things up there.

Maybe with all the news on people being killed by Rx drugs, it is time to start shutting the Pharmacies down.

Mammoth Wellness sucks…it’s now an overpriced monopoly like Standard Oil back in the old days!