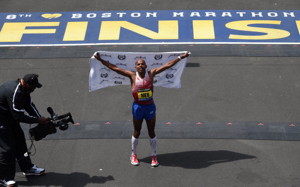 Meb Keflezighi of the US, celebrates after crossing the finish line to win the Men’s Elite division of the 118th Boston Marathon in Boston, Massachusetts April 21, 2014 . (TIMOTHY A. CLARY/AFP/Getty Images)

Last year, the Boston Marathon turned into a nightmare when two brothers exploded bombs alongside the race course killing three and injuring more than 200. This year, the event drew a huge crowd and proved not only safe but amazing. Especially for Meb Keflezighi of Mammoth Lakes. He won the men’s division in 2:08:37.

Reports said the 39-year-old Keflezighi was the first American to win the Boston Marathon since 1985. Meb has long trained in the high altitude of Mammoth Lakes. Check this out –

We work to provide daily news to all of the Eastern Sierra, in the tradition of Eastern Sierra News Service and the Sierra Wave. We bring you daily happenings, local politics, crime, government dealings and fun stuff. Please contact us.
View all posts by News Staff →
Drought hits Mono Lake but not hard enough to cut DWP diversions
Bishop Police find cause to charge local woman with embezzlement
6 Comments
Newest
Oldest Most Voted
Inline Feedbacks
View all comments

Meb for Grand Marshall of the 4th of July Parade!

Way to go Meb!
Awesome.
When’s the party?
Sounds like we need to have a celebration.

Way to go, Meb!!! Not only is Mammoth Lakes proud of you, but the entire world for running Boston Strong! 🙂

Awesome Meb!!! Congratulations and way to make our community proud!