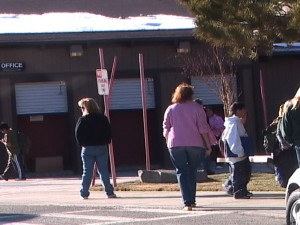 Much earlier, Mammoth school officials determined that the parcel tax measure is still needed to achieve quality schools and academic excellence, as they put it.  In a resolution of support of Measure S, officials said that a 2/3 vote of the electorate would allow the District to continue to apply a special tax on property.

Officials made note that funding from the state and federal governments has been inadequate and uncertain to meet education objectives.  Plus, there is no assurance that future state and federal funding will reach goals.  Officials also noted that they have made every effort to reduce expenditures that still protect academic programs.

The County Counsel’s impartial analysis calls for accountability measures: a statement of specific purposes for the tax, a requirement that the proceeds are applied only to specific purposes identified in the statement, the creation of an account into which the proceeds will go, and preparation of an annual report. Voters in the District from Long Valley and Mammoth Lakes will cast their votes Tuesday.

Deceptive inaccurate description of this measure.This is not a special new tax but an extension of an existing one!

This article is a very inaccurate portrayal of this issue. It comes across as sounding as though this is enacting a brand new tax when in reality it merely extends an existing tax. Homeowners will not be paying a cent more than they already pay.

This is obvious in the actual statement within your article which you do not appear to have actually read. Either that or you are injecting a bias of your own into the article.

Good point. This is an extension of an already existing tax, which is spelled out in the measure.
BK

Decidely NOT a good point. It is an “extension” of a tax that was sold as being “temporary”. And you wonder why taxpayers are growing cynical.

It is a temporary tax, until the state decides to reinstate the billions it has taken from school districts, MUSD needs this money to help our students. This measly $59 parcel tax will produce $660,000 per year to help our school district. This money helps fund our libraries, it provides computers and technology for our students, it provides funds for our district. I’m not sure where Bret Metcalf gets his information on insurance benefits and pensions, but I can assure him my medical coverage could cost me thousands of dollars this year and my future pension will be anything but generous, fair perhaps, generous, no.

Throwing good money at the problem is not going to resolve the issue. Schools already get plenty of funds and yet look at the results. Much of the money never reaches the students and is used up in salary and benefits of both the teachers and administrators. Consider this how many of you out there get full all your medical paid for or generous pensions.

Teachers union consistently fight against the formation of charter schools for fears of them losing there jobs. I only have one thing to say to the teachers, “if you are that good then you will always have a teaching job.”

Your claim that schools get plenty of money obviously comes from a complete lack of experience with the current school situation in America and in California in particular. In our state, where median cost of living is among the top 10 states, our expenditure per child for K-12 education is in the bottom 10. You call that “enough”?

Regarding your rude comment “if you are that good then you will always have a teaching job”: A job, maybe, but would you really want someone teaching your child to be paid minimum wage? Do you have children? I bet not. America is great because we are are a community and care for each other and not a collection of selfish individuals.