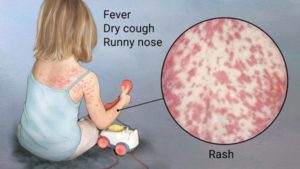 Most of the affected people are unvaccinated residents of New York, Washington, California, Michigan, and New Jersey. In California as of 04/11/2019 there have been 21 reported cases. Butte County has been most affected.

Measles is a serious disease and many affected people have been hospitalized, sometimes requiring intensive care. Measles can be fatal and when the brain is involved (measles encephalitis) may cause permanent brain damage.

Before a vaccine was developed for measles 3 to 4 million cases in the U.S. were reported annually, with 48,000 hospitalizations, 1000 cases of measles-related encephalitis and 400 to 500 deaths.

In 1963 a safe and effective vaccine became available which greatly reduced the number of cases. Over time measles cases decreased so much that in the year 2000 measles was considered eliminated in the US, although it remained a common illness in many parts of the world.

Since 2000 United States measles cases can usually be traced back to a someone who got infected in another country.

Measles is so contagious that 90% of unvaccinated persons exposed to the virus will develop measles.

What are the signs and symptoms, you may ask? Symptoms typically develop 1 to 2 weeks after exposure and may include:
• High fever (first symptom)
• Cough
• Runny nose
• Red, watery eyes
• Small white or bluish spots or bumps in the mouth
• Rash (appears a few days after the other symptoms, starting on head and face and spreading to the rest of the body)

People infected with measles are contagious for about 5 days before they begin to feel sick, and for about 4 days after the rash appears.

Should you or your child develop symptoms that may be measles it is important to see your medical provider promptly because measles is a serious threat to self, family and our communities. You should call your clinic or doctor’s office before arrival, as they may want to evaluate you in the parking lot or have you come in a side door to reduce possible spread to other people in the clinic.

• Ear infection with hearing loss
• Pneumonia (occurs in about 6% of cases and is the most common cause of death)
• Encephalitis (brain infection/inflammation; occurs in about 1 in 1000 cases)
• Subacute sclerosing panencephalitis (an untreatable fatal neurological disease that occurs 7-10 years after
measles infection, occurring in about 1:1300 children infected with measles before age 5)
• Death Individual younger than 5 and older than 20 experience the most complications from measles.

• Everyone born after 1957 should receive two doses of measles vaccine (in combination with mumps and rubella,
this is the MMR vaccine).
• One dose of MMR provides about 93% protection and two doses are 97% effective in preventing measles.
• People born before 1957 were generally exposed to measles as a child and are considered immune.
When measles does occur in persons who have been vaccinated, it is generally milder and less contagious.
• International travelers should receive an MMR booster if they have not had a second dose earlier in life.

Hand washing and general hygienic practices may help prevent measles. Avoiding persons who may be ill can also help to prevent the spread of measles.

Person traveling out of the county are at risk of exposure. Exposures have happened
multiple times at LAX. To date we have had no reported cases of measles in Mono County but with many visitors and with residents traveling the world this could easily change.

OVGA one step away from adding board seats
Fundraising auction, breakfast for Hospice of the Owens Valley