By News Staff on November 27, 2012 in Government Agencies/Utilities 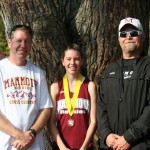 Following is a submitted press release on the talented Huskie:

This past weekend Jody Meads, a sophomore at Mammoth High School, traveled to Fresno, CA to participate in the California State Cross Country Championships. This event was the culmination of a season full of accomplishment for the tenacious 15 year old that just started running competitively a year ago. What she has managed to accomplish in such a short period of time is both impressive and motivating.

Jody placed 4th in a field of 184 of the state’s finest prep athlete cross country runners. Jody survived the rigorous and intense process of whittling out the mass of runners that make up the most competitive Southern Section in order to make it to the State Finals. 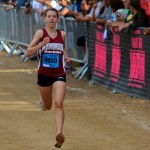 First, Jody was crowned the Desert Mountain League Champion on Nov 1 at the DML Finals in Silver Valley. This win allowed Jody to qualify for the Southern Section Preliminaries held at Mt SAC on Nov 10.

At CIF – SS Prelims Jody ran in Heat 2 winning easily and posting the fastest overall time between both Heats to advance to the Finals to be held once again at Mt SAC on Nov 17.

At CIF – SS Finals Jody survived a bad day of weather and sickness to qualify for the State Finals to be held at Woodward Park in Fresno, CA on Nov 24.

Saturday the 24th proved to be a dream come true for Meads as she worked hard through the 3.1 mile course that makes up and tests the best of the best from throughout the State. Jody has stamped her name within the sport and has gained the respect of her peers and in the process has put the small town of Mammoth on the map for other prep cross country programs to pay attention. Mammoth is no longer known simply for the Town to come and train at, but also for producing high quality talent.

What lies ahead for Meads? A couple weeks of rest and relaxation and then she will lace up the shoes once again and begin a winter season of light running in preparation for the impending Track and Field season starting in the spring. Track will take on a new light for Jody as she can now train on a world class facility in the newly completed Track by the Mammoth Track Club.

Jody’s success is due in no small part to the efforts of her coaches Andrew Kastor and Scott Luke. The duo has combined to create a winning formula. Coach Kastor designs the workouts and Coach Luke prepares and carries out the daily workouts and manages race day events.

Good luck to you Jody and we wish you the very best for you and your future endeavors.

We work to provide daily news to all of the Eastern Sierra, in the tradition of Eastern Sierra News Service and the Sierra Wave. We bring you daily happenings, local politics, crime, government dealings and fun stuff. Please contact us.
View all posts by News Staff →
Bishop City Council: oath of office, new police officers, lower rent
Coming together
1 Comment
Newest
Oldest Most Voted
Inline Feedbacks
View all comments

Bravo Jody! Your hard work is an inspiration to all of us. Congratulations.