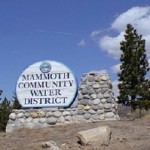 Unfortunately, the current snowpack water content is only 18 percent of normal conditions and it is not likely that the remaining two months of the precipitation season will make up the shortage.  These drought conditions dictate that MCWD  increase conservation efforts throughout 2015 to stretch the District’s limited water supply.  The February 19th MCWD board meeting includes an agenda item to consider raising water restrictions from Level 1 to Level 2.

“Our customers did a tremendous job reducing water use and investing in conservation measures in 2014, but with the continuing drought, we’ll all need to step up our efforts in 2015,” said Patrick Hayes, MCWD’s General Manager. “Although we’re only halfway through the precipitation months, and we may have a fantastic February or miracle March, we’re forecasting continued shortages.  I ask that customers take extra care not to waste water.  We need to work together to safeguard and stretch our limited water supplies as the drought continues in 2015.”

MCWD customers have been under Level 1 water shortage restrictions since the state’s drought began in 2012.  Customers responded positively to MCWD’s request last year for a 10 percent water use reduction, exceeding the District’s conservation goals by reducing water use by 15 percent when compared to 2013. MCWD’s 74 customers with irrigation meters went one step further, achieving an impressive 33 percent reduction in water use. Last fall, Snowcreek VI, The Town of Mammoth Lakes and Juniper Springs Lodge were recognized as Local Water Heroes for their outstanding effort to increase their irrigation efficiency. Overall, 124 million gallons of water were saved, enough to serve 850 four-person households for a year.

However, as the drought enters its fourth consecutive year and snowpack water content remains at historic lows, MCWD has no alternative other than to increase conservation. The surface and ground water supplies servicing the District’s customers are entirely local. While MCWD strives to maintain a reliable water supply for its customers, the amount of surface water produced from the Mammoth Lakes Basin is dependent upon snowmelt. This water has to be closely managed to keep recreation, fish habitats and riparian vegetation sustainable. Therefore, supply can become severely limited during droughts.

The District also has nine local groundwater production wells that act as an essential supply source when surface water is limited. Unfortunately, several of these wells are showing stress due to the extended drought. MCWD has depended heavily on groundwater sources during the current drought, which provided 68 percent of the water used in 2014. Unfortunately, low levels of snowpack mean that MCWD’s groundwater wells will be under further pressure in 2015.

“Our groundwater wells have been a crucial safety net as surface water supplies ran short during the drought, allowing us to continue to meet the supply needs of our region. However, with further water supply shortages on the horizon, it’s more important than ever that we focus on conservation,” added Hayes.

MCWD would like to encourage all customers to check for leaking fixtures indoors and out, keep pools and spas covered when not in use, limit shower times and only run full loads of dishes and clothes. As part of the effort to ensure water-use efficiency, the District also completed a replacement of the old main water distribution pipelines and is now replacing lateral lines. MCWD is also incentivizing customers to save water by offering a rebate program for indoor and outdoor water fixtures, providing free efficient showerheads and actively engaging with irrigation customers to increase landscape irrigation efficiency.

More information on water conservation is available from the MCWD website,www.mcwd.dst.ca.us.

This could be the year that outdoor irrigation is banned for the rest of 2015? Hopefully, we have some decent precipitation during February and March. It is also apparent Mammoth is receiving more thunderstorms the past 2 summers, than in previous years.