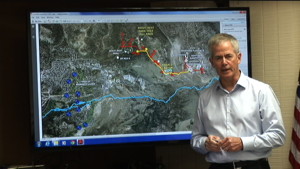 Due to all of their concerns with the proposed expansion of the Geothermal Plant in Mammoth Lakes, the Mammoth Community Water District held a press conference on August 21. The meeting took place the morning before the Long Valley Caldera workshop hosted by Ormat Technologies in Suite Z and was an opportunity for the press to speak with MCWD Staff, two of it’s Board Members, and Mono County District 5 Supervisor Larry Johnston.

The filing of the lawsuit was in response to Great Basin Air Pollution Control Officer Ted Schade‘s certification and approval of the project’s environmental impact report. Schade had previously stated that he would not approve the EIR until MCWD and Ormat came to an agreement on a monitoring and mitigation plan for the new geothermal wells. MCWD General Manager, Patrick Hayes, stated that the water district had, “no other options,” other than to file the suit once the documents were certified.

The petition filed by MCWD alleges that there is a, “lack of credible evidence to support the conclusion that their will be no adverse impacts to Mammoth’s groundwater resources and that there is no hydrological connectivity between the groundwater aquifer and the underlying geothermal system.” The petition goes on to allege that, under the California Environmental Quality Act, Great Basin, “refused to disclose significant information,” to both the public and stakeholders. Furthermore MCWD accuses Great Basin of failing to, “adequately respond to comments submitted by MCWD on the draft EIS/EIR.”

Director of APCD, Ted Schade had said that although his agency’s priority is air quality, it also takes “very seriously the protection of the Town of Mammoth Lakes’ water supply.” He said APCD will not issue well permits to ORMAT until there is a monitoring plan in place. Schade called it unfortunate that the Water District felt the need to sue APCD instead of work to develop a groundwater monitoring plan.

Schade also pointed to the Water District’s hiring of a PR firm for $125,000 as a waste of ratepayers’ money.

Must we be reminded that the Earth is a living being? if only we had that respect and knowledge guiding the way we look at our planet, we might not be left with these circumstances where we act like we can dictate and interpret this mysterious planet to our convenience,… Read more »