By News Staff on March 16, 2018 in Government Agencies/Utilities

Evidence of Intermixing Between Reservoirs Underscores Need for Robust Safeguards 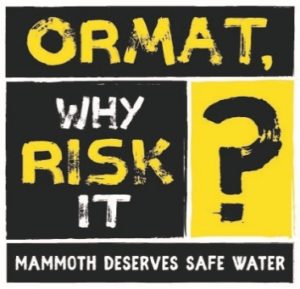 “We are charged with protecting our region’s precious water supply and have repeatedly asked Ormat to partner with us to ensure our water supply is not impacted by Ormat’s geothermal pumping,” said Pat Hayes, General Manager of Mammoth Community Water District (MCWD). “Despite sound science and expert recommendations, Ormat continues to place the community’s groundwater at unnecessary risk. If the company were truly committed to clean energy and sustainable practices, it would implement the necessary safeguards to preserve and protect our community’s groundwater.”

The connection between Mammoth’s groundwater and Ormat’s geothermal reservoir places the community’s drinking water at risk of contamination or depletion, and the threat is imminent. Ormat’s CD-IV project will expand geothermal pumping closer to Mammoth’s groundwater wells, placing new stresses on the region’s complex, interconnected hydrologic system. Without necessary safeguards, increased geothermal pumping from Ormat’s CD-IV project could cause:

–          Depletion of the community water supply – Mammoth’s groundwater could leak into the underlying geothermal reservoir as a result of changes in pressure.

Robust safeguards are needed to protect the water supply. Even a small loss of supplies could be cumulatively catastrophic, forcing the Mammoth community to find an alternative water supply – an expensive and uncertain process, requiring years of planning and environmental review. However, the potentially devastating impacts of Ormat’s geothermal pumping are preventable. MCWD does not oppose Ormat’s geothermal project, but the District is calling on Ormat and regulators to do their part to protect the community’s water supply through three simple steps:

“Mammoth’s tourism industry is the economic heart of our region. My colleagues and I serve the families, employees and business owners, large and small, who are keeping the beat – and we simply cannot allow Ormat to leave them high and dry,” said Mammoth Community Water District Board President Thomas Smith. “While I am a strong supporter of bringing clean energy to our state, energy cannot be considered clean if it comes at of the cost of clean water supplies that serve our communities.”

Ormat is being consciously negligent with Mammoth’s drinking water. The foreign-owned, publicly-traded geothermal giant is the largest company of its kind in the world with a current market value of $3.25 billion. It has the financial wherewithal to invest in adequate safeguards to protect Mammoth’s water supply, but has repeatedly refused to do so. It’s unclear why Ormat is choosing to put Mammoth’s precious groundwater supply at risk, when solutions are readily available to protect the water and community.

The new data analyzed in the Wildermuth report provides clear evidence of a connection between Mammoth’s groundwater and Ormat’s geothermal reservoir, disproving the fundamental assumption of complete separation used as the basis for the project’s environmental review and conclusions – an assumption made by Ormat without using transparent, scientific evidence. Great Basin Unified Air Pollution Control District needs to reopen the environmental review process – the people of Mammoth Lakes deserve a substantive, thorough review of the project’s potentially significant impacts on Mammoth’s water supply – before it’s too late.

“There is a right way and a wrong way to develop clean energy sources. When projects pose a significant negative impact to our environment, the California Environmental Quality Act requires those impacts must be disclosed and mitigated where feasible. The solution is simple – if Ormat is unwilling to voluntarily do the right thing, then our regulators and elected leaders must step up to the plate,” added Hayes.

For more information and to read the full report, please visit: http://www.mcwd.dst.ca.us/assets/groundwaterwei2018.pdf

The certified EIR/EIS states that the geothermal fluids are physically separated by an impermeable barrier from Mammoth Community Water District’s (MCWD) groundwater system and water supply wells.  Therefore, because the two systems were assumed to be physically separated, no mitigation for possible impacts was required.

MCWD never presumed that the two systems were hydraulically separated and challenged the EIR/EIS in part on that basis.  It asked that the United States Geological Survey (USGS) collect water quality samples from wells in the region starting in late 2015.

The report prepared by Wildermuth Environmental reviews the new USGS data. These data show that the assumption of an impermeable barrier is wrong and that the data collected by USGS establish a hydraulic connection exists between the two systems. This hydraulic connection presents significant risks to MCWD’s groundwater supply on which the community depends for potable water. MCWD does not oppose the CD‐IV Project, but is
seeking appropriate mitigation to help detect and protect against adverse impacts from geothermal fluids to its groundwater before they occur.

Discussion
The Wildermuth report analyzes monitoring data collected by the United States Geological Survey (USGS).  USGS has been collecting quarterly water quality data since 2015 from eight water production and monitoring wells in the Mammoth community’s groundwater basin and within the Bureau of Land Management (BLM) geothermal lease area used by Ormat. The quarterly observations during this multi‐year period consistently demonstrate evidence of intermixing between MCWD’s shallow groundwater aquifer and Ormat’s deep geothermal reservoir. The report concludes that a hydraulic connection exists between the two systems.  This shows that the conclusion that there is no hydraulic connection (i.e. an impermeable barrier) in the EIR/EIS for Ormat’s CD‐IV Project is wrong.

1. Presence of thermal waters: Geothermal fluids have particular ratios of conservative elements chloride to boron and chloride to bromide).  The concentration ratios found in the USGS data consistently show that MCWD wells P17 and M26 contain small percentages of geothermal  fluids ranging from 3% to 5%, mixed into the groundwater.  If Mammoth’s groundwater basin and Ormat’s geothermal reservoir were physically separated, geothermal fluids would not be present in Mammoth’s groundwater basin.
2. Higher concentrations of elements associated with geothermal fluids: Elements associated
with geothermal fluids are present in higher concentrations in the warmer groundwater wells
P17 and M26 compared to colder groundwater wells. USGS monitoring data demonstrates:
a. Arsenic concentrations were 25 times greater on average
2
b. Boron concentrations were 9 times greater on average
c. Bromide concentrations were 5 times greater on average
d. Chloride concentrations were 7 times greater on average
If the assumptions in the EIR/EIS for the CD‐IV Project were correct, then we would not expect
to see higher concentrations of these elements in Mammoth’s groundwater.
Arsenic is an EPA regulated contaminant limited to 10 parts per billion in potable water.
Geothermal waters in the Mammoth area contain 1300 parts per billion.  Even a small increase
in the geothermal fluids present in well P17 will overwhelm treatment capabilities and likely
make the well unusable.  In the drought year 2015, this well provided up to 25% of Mammoth’s
water. Losing this well would be catastrophic to the Mammoth community.
3. Physical changes to water quality: Temperatures are about 22 degrees warmer in the MCWD
wells P17 and M26 compared to colder temperature MCWD wells. Those same wells are also
twice as salty on average. Warmer temperatures and higher salinity would not occur if Ormat’s
geothermal reservoir and Mammoth’s groundwater basin were physically separated by an
impermeable barrier.
Conclusions and Recommendations
The groundwater system directly overlies the geothermal system, and the existence of a hydraulic
connection between the two systems presents significant threats to Mammoths groundwater supply.
Once CD‐IV operations begin, adding up to 16 new geothermal wells to extract geothermal fluids and
reinject spent fluids, the project will place new stresses on the system, potentially creating changes in
underground pressure that could present the following threats to Mammoth’s groundwater:
1. Loss of groundwater to the geothermal system: Extracting and reinjecting geothermal fluids
affects the pressure in the geothermal zone.  Mismanagement of those pressures, specifically
pressure reductions, means that the groundwater will flow downward through fissures and
cracks and be lost to the geothermal system and that the sustainable yield of the groundwater
system relied upon by MCWD will be reduced thereby reducing the reliability of the MCWD
water supply.
2. Water quality impacts of increased arsenic to the groundwater system: Geothermal waters
have extremely high arsenic concentrations, on the order of 1300 parts per billion.  Potable
water must be below 10 parts per billion.  Already MCWD’s well P17 is at 100 parts per billion
due to geothermal fluid intrusion.  An increase in those fluids in the groundwater system caused
by geothermal extraction and reinjection could increase arsenic to levels that MCWD cannot
treat effectively, and the major production well would be lost.
3. Boil‐off of groundwater due to geothermal reservoir depressurization: Ormat increased
pumping and increased the depth where it was reinjecting spent geothermal fluids in 1991 in
the Casa Diablo geothermal system. The result created a localized depressurization in the
geothermal system, leading to: vaporization of the geothermal fluid which caused steam to rise
through the fractured ground creating a ground surface hazard; and depletion of the
3
groundwater system in that area and the loss of a water supply well used by Ormat (source:
USGS Report: Deformation near the Casa Diablo geothermal well field and related processes
Long Valley caldera, Eastern California, 1993‐2000, J. Howle et al, Journal of Volcanology and
Geothermal Research – available here). Such an event in the Mammoth groundwater system
would be catastrophic by contaminating or completely depleting MCWD’s water supply wells.
The analysis of the new water quality data, collected by USGS since 2015, clearly indicates an intrusion
of geothermal fluids in MCWD wells P17 and M26. This fact invalidates the assertions in the approved
EIR/EIS. These fluids present a very significant risk to MCWD’s groundwater supply, most immediately of
the potential loss of at least one very significant well. That outcome would be catastrophic to the
community’s water supply. As a result, the EIR needs to be reopened to address these very real
concerns. Additional monitoring wells, starting with deep well BLM2, must be installed and placed into
operation before the CD‐IV Project’s baseline pumping period begins. Clear trigger points must be
established for analyzing potential harm to the public water supply and a response plan must be put in
place to guarantee protection of MCWD wells.

Leave the water safe for all of Mammoth Its our right. I own a Home their for many years. Stop the non since NOW. WE also own A nice business out on 395 .That area needs to be in the deal…