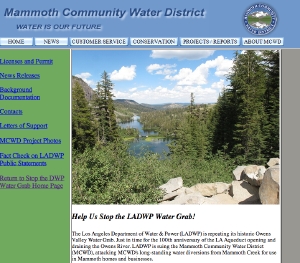 Next, the Water District and the LADWP will present their agencies’ perspectives on the facts and the law pertinent to the cases through a series of briefs filed with the court. The first briefs will be filed by LADWP on or before September 14th. The District’s reply brief in each case is due on or before November 16th. LADWP may file a final brief in each case responding to the District’s briefs by December 21st. In both lawsuits, LADWP claims that the District’s EIR and UWMP are based on “alleged water rights… that the District simply does not have.” The District does have state-issued water rights for its Mammoth Creek diversions. Copies of the District’s water right licenses and permit are available on the website, stopDWPwatergrab.com.

The hearing on the cases is scheduled for January 29, 2013, at 9 am at the Mono County Courthouse in Mammoth Lakes. The hearing will provide the judge with an opportunity to review the evidence and briefs with the Water District’s and LADWP’s legal teams. Court decisions on the cases are due 90 days following the hearing.

The administrative records for both cases are available, in electronic format, to the public for review at our offices and will be posted on our website in 1-2 weeks.

The single document that would instill real confidence in MCWD’s legal posistion would be a court approved water right. If MCWD had a fully adjudicated, judge approved water right, DWP couldn’t say a word, much less mount a legal challenge to the District’s “alleged water rights.” The state water “permit”… Read more »

All they needed is one page, the State permit.

The “stopDWPwatergrab.com.” cite is not yet up.

Would/could you post copies of MCWD’s water rights licenses and diversion permits?
Thanks.

the licenses, etc. are on the MCWD website. Here’s a link that should work – http://www.mcwd.dst.ca.us/CityofLALawsuits.htm

If not, just google mcwd. You will find their site and the DWP Water Grab link is on the left.