By News Staff on May 7, 2012 in Government Agencies/Utilities 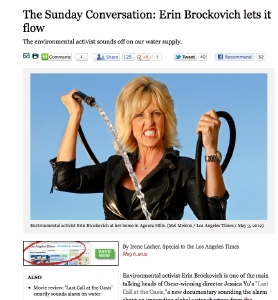 The LA Times interviewed the famous activist about water.

“From city halls to county courthouses, from the State house to the White House – bureaucrats control our lives.  Public servants who often try to become our masters.  People whose salaries we pay, but what goods and services do we get?  On Sierra Wave Media’s Bureaucrat Beat, we’ll report what they’re up to.”  That’s the Bureaucrat Beat declaration of dissatisfaction, but as you may know, Bureaucrat Beat talks about so much more.

Imagine the music from jaws playing.  Now, LADWP – look over your shoulder.  Ahhhhhhhhh!!!!  Erin Brockovich is on your case!  The bull-dog environmental activist has turned her ire on water shortage.  In the Sunday LA Times, a story revealed that Brockovich is a headliner in the new documentary, “Last Call at the Oasis”, which delves into what’s described as an impending global water shortage.  The Times says the film looks at the “diminishing water sources in Central California’s agricultural belt and in Nevada’s Lake Mead, which could affect L.A. if trends continue.”  Hey, Eastern Sierra!  Maybe this fact has spurred LADWP’s new shark-like attack on Inyo-Mono water.  (We probably ain’t seen nothing yet.)

Brockovich heads her own company called Brockovich Research & Consulting.  This may be Inyo-Mono’s ghostbuster call some day.  In the LA Times interview, Brockovich points to misuses of water, over consumption and pollution.  She says, “Water should not be a political issue; water should be a human rights issue.” Applause.

We in the Bureaucrat Beat Newsroom get the feeling that lots of folks make scads more money than we do – even people who head up charitable organizations.  Someone sent us an email the other day to let us know that the heads of organizations like Red Cross, United Way, and Unicef raked in close to million dollar salaries and Unicef’s CEO also got (are you ready for this) a Rolls Royce!!!

On the other hand, the Salvation Army’s Commissioner receives a salary of $13,000 per year.  Heads of many veteran-oriented charities make zero in salary. Now you know where your donations go.

There’s a kind of hush campaign going on in Mammoth Lakes.  People are stunned into mostly whispering about the terrible state of affairs in Mammoth Town government.  People don’t know what to think.  They would like to go wave their fists at their elected officials, but the problems are so deep it’s hard to tell where to start yelling and about what.  Citizens feel powerless and left out.  More than a year of closed sessions serves to disenfranchise the public from its own government.

Nothing hush-hush about Barrett McInerney’s views of Los Angeles Department of Water and Power fights in the Eastern Sierra.  McInerney is the attorney who beat LADWP on the Rush Creek case back in the 80s.  McInerney used Fish and Game code to force DWP to let water flow to keep trout alive in Rush and other creeks, which kept Mono Lake alive. He also defended Stan Matlick of Bishop and the Hillside decree when DWP came after Bishop’s water some years back. The astute McInerney has some advice for Mammoth Community Water District, whose water is under LA assault – show DWP you will fight to the bloody end or you’re finished.

McInerney says it’s not really a question in the Eastern Sierra of finding the right water lawyers.  It’s the question of finding clients with the courage to fight.  Those who have fooled themselves into thinking LADWP are just nice guys who will compromise are indeed that – fools.  LADWP is like the cold-blooded shark. Their mission is to get water, and that’s what they do. McInerney said he respects DWP for doing their job well.

Anyone DWP chooses to attack has a mission too, and it’s not to compromise or play nice.  It’s to fight, according to McInerney.  He said, you have to draw a line and don’t ever go over it.  He warned that Los Angeles will end up owning the Mammoth water district and selling water, if they feel like it, to Mammoth Lakes.  Beware, Mammoth, you’ve got a psychopathic entity after you, and they don’t play nice.

Neither does the Department of Fish and Game. In December, we wrote a letter to the Deputy Director of Communications to complain that we never get return calls from the head of the Bishop DFG office, Bruce Kinney.  Ms. Jordan Traverso wrote back in April to say that since Kinney does not work with the Office of Communications, Education and Outreach, he doesn’t have to call us back.  He is required to inform Communications Department staff about our questions. We believe Kinney has never done that.  Traverso said in some cases the Office of Communication may allow Kinney to talk to us.  In other cases Andrew Hughan of Communications in Sacramento will respond.  In fact, Hughan has been very decent and as helpful as he can be from a far away office.

Traverso also confirmed that DFG employees have to fill out reports each time they talk to media.  We suggested DFG dump that system for healthier communication with the public.  Traverso declined.  We in the Bureaucrat Beat Newsroom feel disturbed about this kind of repressive behavior on the part of government departments.  Our tax dollars support them.  We want to know what they’re doing right here, right now.

Thanks Benett If it was not for your bureaucrat beat I would not hear about some of these things as no other local media seems to report such things. I am checking out the Brockovich article as the water shortage is not just in the central valley it is here… Read more »

Thanks Benett- I like Ted’s response you got also! 🙂

Well said and done Benett. Articles like these keep me reading the SierraWave. I do wish you had that blog section on the home page again . What happen?

Thanks, Trouble. Our webmaster is updating the blog section. Will be back very soon.
Benett

We are PUBLIC servants. That means we have a responsibility to answer to the public we serve, including the media. If Fish and Game has a policy that only communications staff speaks with the media, then local employees need to make sure the communication people respond to local inquiries. This… Read more »