By News Staff on September 5, 2013 in Government Agencies/Utilities 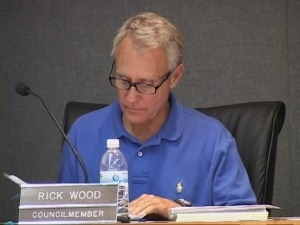 In the wake of surprise news that the Town Manager is out and someone else will lead Town government organization, Sierra Wave Media talked to Mammoth Mayor Rick Wood.

Mayor Wood said that the Town Council “is at a turning point.” He said in moving forward the question always is “who does the Town Council feel is the best person to lead the Town and the staff as we go forward.” Wood said from his perspective, he would like to see someone other than Marianna Marysheva-Martinez.

Although at news time, she had not handed in her official letter, Town Manager Martinez was expected to make her resignation certain. Mayor Wood did confirm that the Town Council placed Martinez on paid Administrative Leave. He also said it was his expectation that the Council would soon receive a formal resignation. The Mayor said he expected the Council to hold a special meeting Thursday. In fact, the agenda for that 5pm meeting Thursday says a closed session for release of a public employee and consideration of appointment of a Town Manager.

Wood admitted that everything that has happened “seems confusing.” He said the Council is “hamstrung, legally, by what we can say.” He did repeat that he expects Martinez’s official resignation. So, what happened between the Town Council and their manager to turn things so sour? Wood did not want to comment on exactly why Martinez is out except to say that the Council, or at least a majority, are “looking for a different leader.” Wood said there is a “broader examination of where we want to go and who is the best to take us there. She was not that person.”

What about reports that the Council would hire businessman Tom Cage? Wood said that was a rumor and the Council had made no appointment. He did immediately say that Thursday’s meeting they may include appointment of an Interim Town Manager, although he said that’s not critical since Police Chief Dan Watson is Acting Town Manager.

Will Martinez receive a buy-out of her contract? Wood said her contract does not call for a settlement but does say termination without cause can happen with 30 days’ notice. So, conceivably, Martinez could receive 30-days’ pay.

How will they pick a permanent Town Manager? Mayor Wood said the Council will have “an open, transparent process involving advertising, a head-hunter or an appointment, whatever method we use.” He said there would be a public vetting of any candidate.

The Mayor described the state of things in Town government. He said Martinez did a lot of hard work in re-organizing government, dealing with the MLLA lawsuit debt and bankruptcy issues. Wood said, “She deserves credit for her role, but we as a Town accomplished those things.”

Wood said the next steps forward include a classification and compensation study, a re-organization of the Recreation Department and in Wood’s view – a new Town Manager to lead the way.

Letter to the editor: Town Council’s “ridiculous vendettas”
Once sworn in, Hardy will go to work as DA
31 Comments
Newest
Oldest Most Voted
Inline Feedbacks
View all comments

It appears that according to the Sheet’s interview with Mayor Wood. Lehman and Rimondo were not a party to these shenanigans. Well my apology to the both of them for including them in my posts as being party to this latest fiasco. Thank you both for sticking your neck out… Read more »

I’m pretty sure you’re right on this! Lehman and Raimondo are class acts compared to the 3/5’s remaining Council Members when it comes to town business.

Yes, our sources confirm that Lehman and Raimondo were not in favor of the ouster of Ms. Martinez.
BK

Thank you for verifying/confirming this. It was an educated guess but one that seemed pretty logical.

SlerraFan & SierraFan sure smells like Riamondo and Lehman shilling, instead of explaining the brown act leaks.

Not even close! I’m not in Government just a citizen that understands the reality of the situation. Thanks though 🙂

Hey I had criticism for MMM. For the most part I think I treated her with respect. Things got heated occasionally but some things got really contentious. What I dislike is the way the TC has gone about this whole thing. To me it was wrong. There has to be… Read more »

Watch out, Wood & Eastman. I just heard a political advisor was hired today to move forward with a recall. Wood’s business will go back to the poor state of affairs it was in before he ran for council. Oh happy days… Lets hope this is true

Among all the things I don’t understand is that if people are so intent on a recall, then why did they elect them in the first place?

Isn’t that the truth, Ken. I hope the recall goes through, but if it doesn’t, I truly hope no one votes for them again.

Because people get the government they elect and deserve.. The real problem is the voting public!

Which doesn’t say a lot for Mammoth Lakes

Completely nailed it Ken, as Desert Tortoise has done in other threads. All the whining yet we had candidates running unopposed last time. This message board is full of carpers more or less advocating banana republic ways – constant recalls of elected officials when they discover disagreements with them. There… Read more »

I know several people who would make excellent council members — they refuse to run. It’s sad to see. On the other hand, the town is in such a mess, who would want to jump into it and try and fix it? The whole thing is not so easy to… Read more »

I am with you Desert Tortoise! She was not a nice person to the employees under her and she was the fall gal that the town council needed her for. They are finished with her and it is time for her to be discarded, so they can move on with… Read more »

Amen, you have no idea of what you are talking about.MMM brought a grace and professionalism to the TOML. Staff loved her and there were tears when she announced she would be leaving in a couple of hours. No good deed, indeed.

I’ve been reading this discusson board for a couple of years and never heard a kind word directed at MMM. Not once. She was routinely and harshly criticized for not being from the area, having a home in the LA area and thus not caring about ML. She was criticized… Read more »

no good deed goes un punished, especially in Mammoth. those that care about town its time to think about constructive comments to the TC. eough tearing apart. we have what we have at the TC now lets encourage them to do what is needed for the staff and the community.… Read more »

Oh yes, I’m sure the C-C picked up the hostile vibe directed at MMM and felt that, in part, helped justify letting her go. Based on comments about MMM even a couple of weeks ago, when I first saw an inkling she was about to leave, I expected cheers and… Read more »

This is a funny discussion board. Until a week ago, no one posting here had even a slightly kind word for MMM. Comments here were often harshly critical of her, sometimes even personal. Now all of a sudden, when the C-C decides to let her go, she is lauded as… Read more »

I was one that was criticized and even accused of being an MMM insider. lol.. I have always thought this was the right person for the job. She’s great!

And to Marianna Marysheva-Martinez… THANK YOU for doing all that you were hired to do! It’s too bad 3/5’s or so of our Council completely stabbed you in the back while enjoying your vacation. For any potential out of the area candidate, RUN unless you like changing jobs often!!!!!

WHAT A JOKE!!!!!!! A bunch of this and that! Leave the council and then do us all a favor and leave town Mr. Mayor!!! / Eastman / Bacon….. The two Councilman Raimondo and Lehman deserve a chance to be a part of a great council team! And not this debacle!!… Read more »

I am the only one tired of hearing Mr. Wood’s “lawyer-speak” once again in these Sierra Wave interviews. He is nothing more than a “vengeful” and “legend in his own mind” individual as one of our so-called political leaders. Think about it – he, along with Mr. Eastman, are the… Read more »

Wood admitted that everything that has happened “seems confusing.” He said the Council is “hamstrung, legally, by what we can say.”

Mr. Mayor, What , you are joking. You hired MMM , She has been around for quite sometime. You just figured out she was not a good fit! You are unreal What direction speak of that MMM could not provide? I am sure that she would have done anything a… Read more »

Give everyone a break
Reply to  mk

I think Mr. Mayor, like Eastman, has been hangin’ around a wee bit too long and in the process, perhaps entertained the notion of dirtying of their hands. I.e. Airport fiasco. Never seen so much secrecy masked by “attorney talk.” Methinks Mr. Mayor might be better served handling divorce cases… Read more »