LOS ANGELES — Mayor Eric Garcetti (Tuesday) lifted the emergency declaration he initiated in March to protect the lands and communities near the Los Angeles Aqueduct from flooding created by record snowpack in the Eastern Sierra. 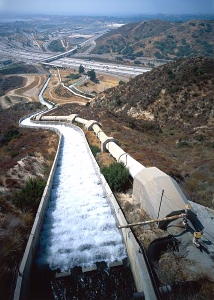 The declaration helped the Los Angeles Department of Water and Power (LADWP) respond to the threat by triggering special City rules that allowed the utility to quickly contract for the goods and services it needed.

As a result of Mayor Garcetti’s Declaration, and effective collaboration with the Inyo County Emergency Preparation team, LADWP was able to keep local residents safe, avert costly damage to property along the aqueduct, and minimize the deluge by feeding much of it into the groundwater supply.

“I declared this State of Emergency because the people of Inyo County, their property, and our water infrastructure were facing a grave and immediate threat,” said Mayor Garcetti. “Today, because of an extraordinary collaborative effort, I can report that we have successfully averted disaster. On behalf of all Angelenos, I want to thank our incredible LADWP workers, and our Inyo County partners for helping us navigate this crisis.”

The snowpack brought more than 303 billion gallons of water into the Owens River Basin. As a result of LADWP and partner efforts, groundwater levels rose by nine feet in the Owens Valley, on average, compared to 2016. During the emergency efforts, LADWP spent approximately $27 million to achieve the following:

“Thanks to the hard work of crews and contractors, the investment by Los Angeles ratepayers for water infrastructure has been protected. Through this Emergency Declaration, LADWP repaired our existing infrastructure and helped ensure water reliability for San Fernando Valley residents as we continue our pursuit to maximize local water resources,” said Councilwoman Nury Martinez, Chair of the City Council’s Energy, Climate Change and Environmental Justice Committee and member of the Inyo/Los Angeles Standing Committee.

“LADWP’s efforts to prepare and operate the City’s water conveyance systems in the Owens Valley during this year’s Spring runoff were phenomenal. Without the tremendous work done by LADWP employees, the flood damage sustained by our communities during this emergency would have been much, much worse,” said Inyo County Administrator Kevin Carunchio.

“We are thankful to have partnered with Inyo County and for their support to protect both the public’s safety and property from significant damage following last season’s near record snowmelt. Our crews mobilized quickly following the Mayor’s declaration and with the support of the City Council worked diligently to gather and spread water.  We are proud of the dedication and efforts of our crews to avoid the severe flooding that could have affected the residents and environment of the Owens Valley and the Owens Lake Dust Control Program,” said LADWP General Manager David Wright.

While the threat of extreme runoff has diminished, LADWP will sustain efforts ahead of winter storms. Safety signs at public access points near swift water locations will remain in place, with residents and visitors to the Owens Valley encouraged to practice water safety. Inyo County is leaving its own emergency declaration in place to assist in ongoing infrastructure repair work.

Someone please tell the bozo, we don’t need their kind of help.