Marianna Marysheva-Martinez, hired in early March as Mammoth’s Interim Town Manager, initially planned to move on at the end of June.  Martinez has confirmed that, as allowed by her contract, 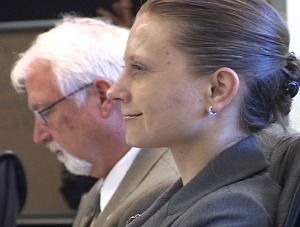 she will stay on in a month-to-month arrangement to assist the Town as needed.

Martinez did confirm that one of those tasks will involve negotiations with Mammoth Lakes Land Acquisition, the holders of the massive $41 million debt over the airport lawsuit.  Martinez has spent a great deal of time on the Town’s finances – documentation of money in the budget and plans on how to balance a $2.7 million shortfall.  Now, she will turn her focus to MLLA and how to negotiate debt payment.

With a masters degree in public policy and experience as the City of Oakland Budget Director and Assistant City Administrator during severe budget crises, Martinez has the chops to manage tough times.  Mammoth residents continue to ask about funds in the Town budget and if the money could be used for other purposes.

One of those funds was the recently discussed $8 million vehicle replacement fund. Martinez called it a very typical practice for cities to set aside funds for vehicle replacement.  For Mammoth that means snow removal equipment and police cars.  The money comes from gas tax revenue and is restricted in how it can be spent.  The amount of $8 million, Martinez said, is based on a very detailed replacement schedule.  Also, reducing this fund, she said, is risky since the Town will not be in better financial condition later.

Cyndi Myrold, Town Finance Manager, put costs in perspective with information that snow blowers cost $240,000; snow loaders, $350,000; plus buckets and plows for the loaders cost around $20,000 each.

Other set aside funds that are tied to specific expenses include an employee leave fund of $1.8 million, which is 85% funded and an employee health benefits fund of $162,000.  These two funds are required by union contracts.

As for the process with MLLA, Marysheva-Martinez said there are no scheduled meetings.  “It’s on an ad hoc basis,” she said.  “It is somewhat driven by MLLA.  We provide information to them as we can.”  Martinez did say that two partners from MLLA came to Mammoth June 13th and 14th.  She said when the next packet of information has been reviewed, they will likely meet again.  Martinez said it is unknown when substantive negotiations will start.

where is Paul Marangella when you need him?

Oops my bad…..but still nice to see that the public does get a reaction. Its just time to clean up this whole stinky mess and move on and bring Mammoth Lakes back to why we all came here to live for…beautiful country, a great community and a leading resort town.

Holy smokes! Two town Managers? I feel we will be paying two people to do the job of one. I also think the incompetents should have kept her because she is doing a better job than anyone I’ve seen in that position since we become “The town of Mammoth Lakes”… Read more »

I was at this meeting when this picture was taken. I was sitting right there and the smile was a result of a young Mammoth Lakes Swim Team kid got up to the podium to read her letter to the Council on why they shouldn’t cut Whitmore Pool. I hope… Read more »

Actually the photo was taken at an earlier meeting. I believe Leigh Gaasch was speaking in public comment but not sure.
Benett

Thanks for that. Things are bad when we start questioning smiles.

Actually, I shot the picture at an earlier meeting. Marianna Marysheva-Martinez was smiling at someone making a public comment.
Not a child. Just for accuracy’s sake.
Benett Kessler

Ya can’t make this stuff up! Absolutely unbelievable.

So let me get this straight…we keep MMM to the tune of 150K a month, thereby potentially wiping out all the potential savings created by employee concessions and budget cutbacks. In addition to that, if that “Finance Manager” (that incompetent myrold person) is still working out of class as the… Read more »

sorry everyone, I meant 150K A YEAR, not a month