In loving memory of a loving wife and mother

Mary “Jean”Miller arrived to this world May 1938 in Putman, Virginia.  Born to Pleas and Maggie Buchanan, she was the youngest of fourteen surviving children. 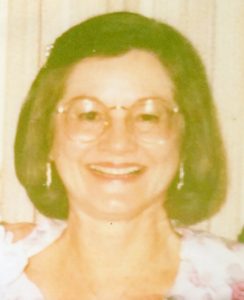 Mary spent her childhood living in several Eastern States being raised by a few of her older sisters.  She came to California as a teenager and saw the ocean for the first time.  While attending Bellmont high school she worked at Orbach’s department store in Los Angeles.  It was there that she met David, valedictorian of Beverley Hills high school, the love of her life.  They soon married at 19 and 20 and started family life in the 1950”s.  After two kids, careers and volunteer work, Jean (as she was known to her children and friends) and David moved to Mammoth for a few years to enjoy the mountains but then settled on scenic Bishop for the next thirty plus years. Busy with grandchildren and volunteer work passing the time, the Bishop years rolled by filled with loving memories especially on holidays.  The years were cut short when they we’re in their seventies as David became ill with cancer.  In 2014 David succumbed despite all of Jean’s loving care.  She passed three years later peacefully, June 26 2017, never recovering of a broken heart.  A small family gathering held services at East Line Cemetery on a beautiful June day. As we felt the sorrow of our loss and said our goodbyes I could not help feeling some solitude knowing Jean and David were side by side and maybe somehow reunited in some glorious way.  Survived by daughter Connie Arechiga, Son Michael Miller, 7 grandchildren and 4 great grandchildren.