Delores Marsh pleaded guilty to one count of grand theft and one count of forgery Thursday at the Independence courthouse. She accepted a sentence of two years in the Inyo County jail and will pay restitution to the tune of $322,000 to the Inyo Mono Auto Body. 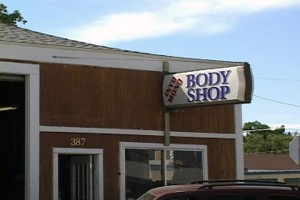 A year-long investigation, following a complaint filed by the body shop, led to Marsh’s arrest in February of this year. The original charges were five counts of grand theft and five of forgery, altering entries in books and records. The counts she pleaded guilty to involved purchases from Target in excess of $46,000 made between December 2009 and April 2013. The other charges were dismissed.

The restitution begins with a $100,000 payment at Marsh’s sentencing hearing, scheduled for January 20. Her attorney Victoria Campbell explained to Judge Brian Lamb the payment may require additional time as the source of the funds will be the sale of Marsh’s home. After Marsh serves her sentence, a payment schedule will be set up for the balance of the $322,000.

At the start of the preliminary hearing, Lamb recessed to allow Campbell and Edward Skelly from the state Attorney General’s office to confer. Fifty minutes later, the two-and-a-half year long case was over.

Tom Hardy represented Marsh in the early stages of the case, prior to being appointed District Attorney. Once the Bishop Police Department completed the investigation, the case was transferred to the Attorney General’s office in Los Angeles.

Looks like corruption in this County Goes Really deep.

What about the biggest losers of All,
the Rossi team?

They are both losers, and dishonest.

Sentenced to 2yrs. county jail. Which means you do 1/2 time. So she has a year to do, but don’t be suprised if she isn’t in there longer than 60 days. Corrections (including county jails)…can let you go anytime before your agreed upon sentence.

This what’s wrong with the system. 2 years? That’s $161,000 dollars a year. And she’ll probably never pay full restitution. If you’re willing to spend a year in jail for 320k it’s not a crime it’s a job.

Seems like Inyo County needs to replace a judge.

Wondering what happened with Sally and the fair grounds?

Your probably right Wondering. I’m just amazed at how our justice system really deals out justice and punishment. In our other big embezzlement case, they went all out on the husband and wife. I’m not sure how that ended for them, but I’m pretty sure the local legal beagles didn’t… Read more »

This is a black eye on the Sheriff’s Dept. and a perfect example why some people don’t trust Law Enforcement.
Where is there Moral Compass?

A couple of black eyes Presto!

She had to plead guilty because if she went to trial then her husband would have to plead the 5th to not reveal his complicity. if this trial were drawn out and all evidence revealed, than both Marsh’s would be facing some prison time.

This whole thing stinks. It is hard to believe her husband knew nothing about her having a extra three hundred thou laying around.

@ Trouble…my guess is that’s just what was “found”. Anytime someone is a thief, you just never know what was actually taken. And you know sure as the ground I’m standing on…her husband knew.

I guess if you are a Great Actor and Go For it you can Cheat Anybody . But how can people like these look there kids in the EYE.

Kinda bothers me . You know , All my life i have done a damn good job to never Lie or Steal from my friends and Neighbors. I was a Boy Scout and actually took it to heart for quite a while , i was also a member if the… Read more »

Gary Trotman….you think it’s bad here….go spend 30 years in Lancaster,then go to Salem,Oregon for another 10,then compare what’s worse as far as thieves.larceny and other crimes go.

….four counts of grand theft and four counts of forgery dropped,leaving one of each to charge with….I’d jump at that and plea guilty too !! Restitution payments will go on for years and years….and my bet,with a non-violent crime such as this,that two year jail term will equate to about… Read more »

The way this should work is if she fails to make payments or she commits another crime, she should immediately have to pay full restitution or return to jail. I’d love to know the sentencing details on this because it will show how clever or not the judge is. And… Read more »

Their going to declare bankruptcy . That’s why they want her to really pay the hundred thousand first. Da

they’re —as in they are

She did it at her previous job…and her Deputy husband was aware of that… and then Inyo Mono hired her… so there is always hope…eh?

The bummer about the @ Rebecca is that Inyo Mono Body shop did not know when he hired her that she had done it previously.

You are most correct. But the Deputy in her life knew..she knew, and it was kept hidden from most. Tib had the greatest intentions and extended a job and a friendship to an ultimately shady character and her family. Always wondered how the Marsh’s paid for those fancy pants cruises,… Read more »

John, the dirty little secret in this case lyes in who she is connected to. But, but, but what would I know.

What does the 2 year sentence mean exactly? Does it mean 2 full years in jail, or will it likely translate to an actual shorter stint?

I have said before and will say again, that she should have done this from the beginning. And if her husband was a stand up guy he pretends to be, Tib would have been paid back right away. I will keep my fingers crossed that they get paid back, and… Read more »

Often these payment schedule terms are better than any loan you can get from the bank.

Where’s she going to get money to makes payment terms? I’d never hire her.

@John my hopes is no one will. I know I wouldn’t.

She’d have to move out of the area and lie on the employment application, then and only then might she find employment.