The Eastern Sierra has doubled for a lot of places – India, Tibet, Afghanistan. Recently, the Mono Lake area turned into Mars, kind of. 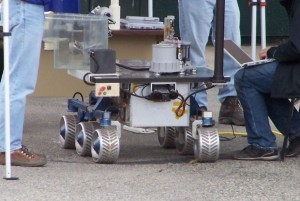 The Jet Propulsion Laboratory and NASA brought a prototype Mars rover to Mono Lake, staging it under tents at the Scenic Area Visitor Center. According to the Mono Lake Committee website, NASA wanted to test the rover’s sampling equipment and procedures in an environment that would, at least, produce some Mars-like challenges.

In their continuing work to search for life on other planets or somewhere else in the cosmos, scientists have plans for their rover to check out Mars. According to the Mono Lake Committee, scientists think that areas on Mars that had terminal lakes like Mono Lake might have sustained life and preserved evidence of it.

The Committee website says this was not the first time NASA has tested its methods at Mono Lake. In 1995, NASA used an underwater vehicle to take tufa samples. Last week, NASA planned to core tufa and collect evaporite salt deposits.

Rain and bad weather got in the way to some extent, but Lee Vining High School students got to check out the rover up close.

We work to provide daily news to all of the Eastern Sierra, in the tradition of Eastern Sierra News Service and the Sierra Wave. We bring you daily happenings, local politics, crime, government dealings and fun stuff. Please contact us.
View all posts by News Staff →
CERT Brings Emergency/Disaster Training to Mammoth Lakes
Another Wreck Victim Dies and CHP Still Waits for Report