On June 1, 2015 the Mono County DA’s Office conducted flight operations in accordance with the Drug Enforcement Administration’s marijuana eradication program.  The purpose of the program is to locate large scale outdoor marijuana grows on public lands within Mono County. 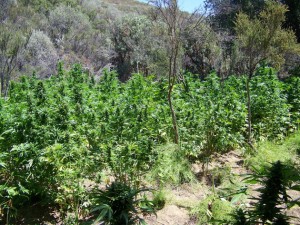 These flight operations resulted in the detection of several marijuana grows in rugged and remote locations in the southern Mono County area. The grow sites were very large in size and ran up to approximately seven miles in length. 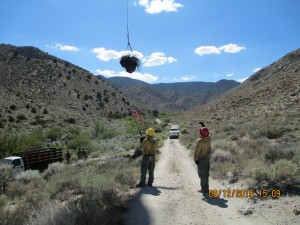 During the investigation, it was determined that the largest grow, which was located in Mono County, was typical of grows commonly operated by Mexican Drug Trade Organizations. Along with those characteristics, several Hispanic males were identified and were seen tending to the garden armed with rifles. 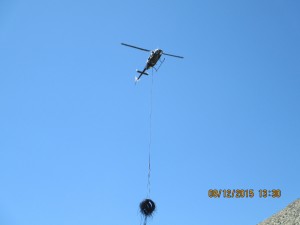 Due to unknown reasons, it was determined that the persons responsible for tending to the garden had fled, leaving the garden unattended.  The heavy late July rains appeared to have damaged the marijuana plants within the garden and therefore that is suspected to be the reason that the garden was abandoned.

During eradication and reclamation efforts approximately 40,000 marijuana plants with a conservative street value of well over $2 million dollars were located and destroyed from this site.

During reclamation efforts a total of 4,401 pounds of trash was removed. Some of that consisted of 10.82 miles of irrigation hose and 550 pounds of fertilizer.  Numerous other illegal and highly toxic pesticides were found being used in the garden and Hazmat crews later responded to recovered and removed those pesticides. 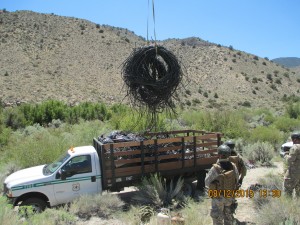 Large scale marijuana gardens on public lands creates a danger to the public and to our recreational users of these lands.  Unfortunately, hunters, hikers and others that come across these types of gardens and the individuals who attend these gardens put themselves in great danger.

Along with the public danger there are also serious environmental impacts that these marijuana gardens create.  If you ever encounter a marijuana garden you should quickly and quietly remove yourself from the area.  Do not continue on your path and do not make contact with anyone in the area.  Immediately call the Mono County District Attorney or any other law enforcement agency as soon as you possibly can.

Zack….You talk like a fool and a racist…from your post there,it’s easy to see why you don’t like President Obama…in case you haven’t noticed,YOUR view is in the minority….the 2008 and 2012 elections prove that..as the 2016 election will too..just one of the angry minorities in this Country….as far as… Read more »

I agree with Low-Inyo– and would add that you also speak as a typical illiterate and ignorant person.

Hey Low Inyo- what country are you from? From your remarks it is obvious you are some kind of wingnut with only the warped wisdom you find on the web. Obummer will take credit for anything positive. Unemployment rate down, mexicans all got telemarketer jobs with free cell phones. Thanks… Read more »

I’d like to point out Chimpanzees don’t have tails.

If you ever wondered if you are looking at a ape or monkey, look for the tail. Monkeys have tails, apes, chimpanzees, bonobos, gorillas, orangutans, gibbons, and HUMANS – do not.

Hope this clears up things up

Seven mile long grove. And not a single arrest!?. Smh.

I have a hard time buying it was abandoned. Looks like the grow still had potential for a hefty return on investment. I am %100 percent against these illegal grows, but I’m also against the LEO camp out / party every year. Just like the war on drugs these yearly… Read more »

Since news seems to be a little slow this time of year, I’d like to know how they know this was a drug cartel farm? Or our they just guessing?

Some people have the solution and how the Government can profit from this growing problem,not only here in Inyo County,but Nationwide…..the Donald Trump way…..Let the growers grow on National forest land,let the plants get big and healthy….keep an eye on things,and when they come to cultivate, have an IRS agent… Read more »

Cool Badfinger! Mine are also doing very well this season.

I’m thinking of entering Mexico illegally and demanding I get a driver’s lic, education for my kids, and financial assistance while waving the flag of the United States of America.

That probably wouldn’t turn out well would it?

Wow!!!!!! Wow!!!!! Wow!!!! Some of you just don’t get it do you? The growers are the cartels geniuses. they send a mule (low level employee) to the mountains to harvest the crop. That’s why no one is arrested, and that’s why you can’t tax them. Maybe, the sheriff’s dept. Can… Read more »

I agree with Zack, the tax the growers comment was just that a comment, not really serious about taxing the growers. I hope they stop the growers and throw them back to Mexico where they belong, If you are happy with the state off our government and Washington, Then cut… Read more »

The unemployment rate is bs. once you fall off the back side you’re out of the system and not longer counted as unemployed. and last I checked the war isn’t over in Iraq in fact just about the entire country has been taken over by isis. Lets say the Iraq… Read more »

John…Your right….the unemployment rate I have listed is incorrect…it’s not 6.1….heard on the news today it’s down to 5.1….and I’m not sure what you mean by “falling off the back side”…does that mean that is who no longer collects unemployment benifits or no longer is looking for a job ?… Read more »

Low-Inyo I agree with of that. yes, my point was the people who’s unemployment benefits have ended are no longer counted. We also have the problem women who have two kids out of wedlock and say they don’t know who the father is getting benefits while the father of the… Read more »

Sorry to go on a tangent here, but why is the situation you describe “problem women”? Are the men not participants in your conspiracy? Just the women are the problem, huh?

Hey lower Inyo, you say congress would stop Trump from doing any of his plans. I would like to point out that congress has not stopped Obama from putting any of his insane, destroy the USA that we all love, plans in action. We need a new perspective to stop… Read more »

If Trump wins, there will be a lot of job opening in Mammoth Lakes.

Employers will probably have to pay a bit more an hour too.

John….If Trump wins,there would be a LOT of job openings across the whole U.S. of A.,but not because of what your probably trying to refer to…the job openings,mine included,would be because many would be fleeing to another Country to avoid the circus and mayhem that was headed our way…..but again…..mute… Read more »

the ice rink is a TOML issue, not a Mono county issue.

The “Ice Rink” is on county land. I don’t know how important that is….

earl duran :.The thing about Donald Trump,maybe not so much with this “marijuana growers” topic,but with others is ,if he does get the GOP nomination,which I doubt he will,and then if the Country went brain-dead and did elect him into office on election day 2016,he still would have to get… Read more »

Trump would tax the growers, there is more to the Donald than you think, it is great to see the worms up in D.C. being forced to make up new lies, heard that there is
a shortage of Depends @! the Capitol.

Wow…what a waste of money mono da office. You should let the forest service deal with their federal dollars and save our county funds for something more productive like a roof for the ice rink!

This is nothing to be proud of. 40 yrs. into the ‘War On Drugs’ and our local mountains are full of Mexican drug cartels growing weed everywhere. 40 yrs. Folks! It’s getting worse, not better. Quit buying what the govt. is selling. We’re being fleeced! You want this to go… Read more »

I followed the tax dollars and it went to law enforcement. This is nothing but a big party for law enforcement, and they look forward to it every year. If the deported illegals I think you’d see a lot less grows on public land, but that would be pro-active and… Read more »

Curious… how do you suggest this “pro- active” approach would go? How would you do it?

I think they could stake the grow out, let them harvest, then follow them to the big guy at the top. But I understand in this case it sounds like the site was abandoned so that might not have worked. What’s going on now is 100% reactive, and they’ll be… Read more »

btw, if they staked the grow out and followed the weed to the big boss they could probably confiscate everything they found along the way. It would probably lead to the confiscation of millions and millions of dollars, cars, planes, homes, you name it.

Benett Kesler basically said I was completely nuts for thinking something similar to this but it’s too bad we cant monitor these growers until harvest time and then bust them, sell the marijuana to pot stores in the state. Money talks and that’s a lot of money to go where… Read more »

Trouble, I think you forget to put a “D” at the end of your handle.

Whats the definition of insanity again? expecting something different from the same actions or something like that… how many years in a row has this happened and you think we are making progress?? I’m pretty sure supporters of this status quo lost the argument years ago, only the efforts of… Read more »

The smoke shop”s tax revenue paid for this raid!

Trouble :…Maybe Donald Trump can MAKE them fight the fires,and then MAKE them build that 300 foot tall border fence…and of course MAKE Mexico pay for it, all before the mass deportation he has planned takes place.

After he builds the wall around the United states he can fill it with water…
U.S.A. problems solved…

confused : Those plans with the water in the wall might have to be put on hold.I’m hearing once the “great wall” is built,he’s got plans to build a “great,great ark”…much greater and bigger and better than the Biblical Noah’s Ark..and then start shipping out the European immigrants and “anchor-babies”…..question… Read more »

I’m kind of enjoying listening to Trump. The politicians are getting schooled by the class clown.

Trouble :.We can agree on that one….The funniest part is watching the other Republican clowns getting all antsy about him now…not really knowing what to say or do about what he says or does. That’s the funny part…sad part is how this makes America look to the rest of the… Read more »

Maybe they can help fight the fires when they legalize it?

good job. Keep those people out of the eastern sierra!

Great job, everyone! Thank you for your continued efforts to rid the Eastside of this criminal element, not to mention the environmental damage caused by these grows!