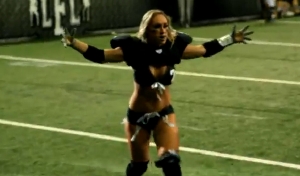 Mammoth High School graduate Melissa Margulies continues to shine with her incredible skill as a football player in the Lingerie Football League (LFL).  Melissa and her team, Los Angeles Temptation, will play in the LFL Super Bowl on, yes, Super Bowl Sunday in Las Vegas at the Orleans Arena.

Proud father Marc Margulies of Mammoth Lakes said LA Temptation won the Western League Conference recently and that puts them in the Super Bowl against Philadelphia Passion.  Melissa, who is also a professional trainer, was named Most Valuable Player in two out of the four league games.  Marc said that Melissa caught a 35 yard pass in the first 15 seconds of one game and completed a touch down. A definite “wow” moment.

As for the LFL Super Bowl, Marc said, “We’re real excited.”  He added that Melissa was selected for what amounts to the LFL all star team or Fantasy Team.

More performance news from the Margulies family – father Marc Margulies, always busy in the film business and usually behind the camera, will appear in a brief role in the new movie, “Act of Valor” soon to be released and to air in Mammoth Lakes and possibly Bishop.  Margulies was at work on the filming side when the director asked him to assume the role of U.S. Ambassador to the Phillipines.  He delivers his lines, then meets his demise.  Margulies called it a “fantastic” experience.