There was a record-breaking attendance at this year’s 48th Annual Manzanar Pilgrimage. Over 2,000 visitors attended the Pilgrimage held on the weekend of April 29 and 30. With this year being the 75th Anniversary of Executive Order 9066 by President Franklin Roosevelt which resulted in the incarceration of 120,000 Japanese Americans and those of Japanese heritage, this year’s theme, “Never Again, to Anyone, Anywhere!” took on special meaning. 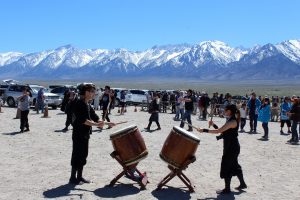 The traditonal Ondo Dance was performed at. the closing of the ceremony – Photos by Charles James

Roosevelt’s Executive Order allowed a whole group of American citizens to be deprived of their civil rights and civil liberties based purely on their national origin and outright racism and be segregated into concentration camps.

Manzanar was one of the best-known camps of the ten concentration camps established under the executive order. Over 10,000 Japanese Americans and legal permanent residents of Japanese heritage were held behind barbed wire fences in this remote location called the Manzanar War Relocation Center during World War II from December 1942 to 1945. 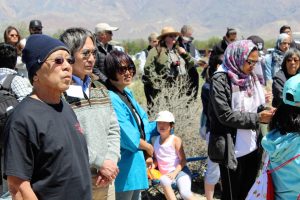 It was a diverse gathering at the 48th Manzanar Pilgrimage

The ceremony started with the UCLA Kyodo Taiko drummers, followed by a welcome from the Manzanar Committee. Manzanar’s Park Superintendent Bernadette Johnson told the gathering that the camp’s history and the stories of those incarcerated there, would be preserved. A new record of over 105,000 visitors came to the park in 2016. 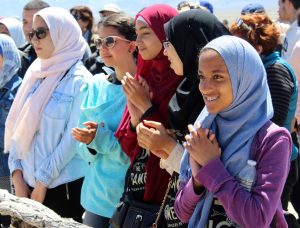 The Consul-General of Japan in San Francisco, Jun Yamada, spoke of the hardships endured by camp incarcerees and of his past visit to the Manzanar, saying it had a great impact on him. His comments were followed by speeches from others that expressed outrage and defiance at the seemingly similar conditions that led up to the concentration camps during WWII and the current political atmosphere being touted by the current Trump administration.

Manzanar Committee Co-Chair Bruce Embrey said that “there was a vicious, just despicable drive to make sure that these camps were sites of suffering. That the people here were going to be isolated psychologically and physically, far from civilian populations, in desolate areas intended to humiliate and make people suffer.” 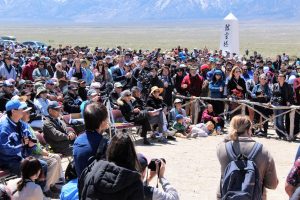 It was a record-setting Pilgrimage with a crowd estimate of over 2,000

The Manzanar Committee’s Sue Kunitomi Embrey Award was presented to Alan Nishio in recognition of his more than 40 years of advocacy on behalf of civil rights.

Former California State Assemblyman and long-time community activist Warren Furutani was the keynote speaker. He was critical of the attempts to malign Muslim Americans and those of Muslim descent living here legally as threats to national security. He encouraged Americans to stand up to it…and vote, offering words of caution against the despotism and fascism that seems to be threatening the country.

As always, the Pilgrimage ended with an interfaith service at the “Soul Consoling Tower” cemetery monument. An Ondo Dance was in progress as visitors began to leave. On the minds of many was the question, “Are we witnessing another time in American history when human and constitutional rights are again being attacked by our own government?”

When the intention is cheap virtue-signaling – really, the principal skill of the modern progressive – the distinction between interning American citizens because of their race and limiting visas for foreigners from a small number of countries that even the Obama Administration identified as potential sources for 9-11 style terrorists… Read more »

Comparing the atrocities of interning Americans to a TEMPORARY travel ban is just plain pathetic.
Trump won, everybody else lost, deal with it.

Yes DT won. He was elected president though, not king. And thank the heavens for the two other branches of our government. They are the only things keeping him from becoming a dictator.

Same for Obama, he hinted at a third term, remember? Talk about becoming Dictator, good grief. Don’t thank the heavens, thank our founding fathers, they set it up that way.

Timber, our founding fathers had nothing to do with term limits. Term limits were started after world war 2

How many of you knew our neighbors to the north – Canada – did the exact same thing to their west coast Japanese populations? They forced the Japanese out of British Columbia and into Manzanar-style ‘concentration camps’ in Canada’s interior regions? Wikipedia has an extensive article about it – here… Read more »

Thought for a while the comments were about the Japanese-run concentration camps. The speeches delivered were a total distortion of the facts and totally ignored the conditions of the time. Comparison to the temporary travel ban proposed by President Trump has no basis.

..Ted Reynolds..”proposed by trump”….just like everything else he promised his lap-dog followers he’d do….none of it getting done or will get done…ain’t gonna happen…all talk …sadly,this is what he’s done with his big stupid mouth and said all leads to this sort of thing….the main topic at a gathering where… Read more »

‘Never Again, to Anyone, Anywhere’…Someone tell that to the current POTUS.

‘Never Again, to Anyone, Anywhere’

strange to see the thumbs down…..all they are saying is, never treat someone based solely on their race, religion, etc….. base how you treat them on their own behavior. Hard to see that getting a thumbs down.

Exactly. This and our recent election have shown that there are at least some out who aren’t much different than those who supported the imprisonment of Japanese-Americans during WWII. The cream will always rise, and the sludge will always sink.

I’m proud of Manzanar. I absolutely love this.