By News Staff on May 30, 2017 in Entertainment/Local Events/Activities, General Misc. Stories, Public Event

Eastern California Museum installs striking Manzanar mural, thanks to help from its partners

The Eastern California Museum recently installed a striking, wall-sized mural in its permanent Manzanar exhibit, thanks to a little help from its friends. 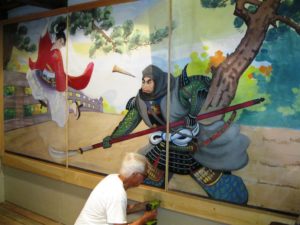 “The museum is fortunate to have some great partnerships, and the story of the restoration and installation of this wonderful Manzanar Mural and the corresponding work to revamp our Manzanar Exhibit is an example of how those partnerships help improve the museum,” said Museum Director Jon Klusmire.

The mural was one of several that were painted in the Manzanar War Relocation Center during WW II. When the camp closed, the paintings came into the possession of an Independence resident. In the 1980s, two large murals and other paintings from Manzanar were donated to the Museum.

The murals remained in storage until the museum’s partners at the Manzanar National Historic Site obtained an $85,000 grant to restore the murals and other large paintings from Manzanar in the Museum collection, Klusmire said. After the restoration work was completed, one mural, which depicts a sweeping landscape of the Owens Valley, was loaned to Manzanar National Historic Site last year and is currently on display on the stage in the Auditorium in the Visitor Center.

Museum staff then started making plans to display the second mural, which is a colorful depiction of a famous scene in early Japanese history that has since been immortalized in folklore – the 12th Century battle on the Gojo Bridge in the city of Koto between two legendary samurais, Benkei and Ushiwakamaru. The mural was painted by Henry Masasuke Kumano, of Block 19, and hung in Manzanar Mess Hall 16.

But first, the Museum’s Manzanar exhibit space had to be redesigned, since the mural was painted on three full sheets of sheetrock, with the finished work measuring 12 feet wide and 6 feet tall,Klusmire said. Offering a precise eye and plenty of ideas on the redesign was Manzanar National Historic Site Ranger Mark Hachtmann, who worked with museum staff on his own time to brainstorm various approaches and presentations for the entire space.

Accommodating the mural required redoing the physical exhibit space, which entailed having someone on hand with construction skills. Enter Rich White, president of Friends of the Eastern California Museum, and wife Kathy. Move a wall? No problem. Put up sheetrock on two walls? Easy. Hang the heavy, replica Manzanar War Relocation Center sign? Not a big deal. Design a rack and clips to hold the huge mural in place? Sure.

Rich and Kathy were also on hand for the installation, and with minor help from museum staff, the colorful, dynamic mural was securely displayed in the Manzanar Exhibit. Hachtmann then arrived to help install energy efficient track lighting that completely changed the atmosphere in the exhibit and subtly highlighted the mural’s many details, Klusmire said.

Next up was rearranging the assortment of furniture in the exhibit, all of which was built by internees in the Manzanar Wood Shop. Next up was hanging a selection of the Museum’s framed Toyo Miyatake photos of life at Manzanar. Lending a hand with that task was volunteer Claiborne Mitchell.

More changes are planned for the Museum Manzanar Exhibit and the Museum staff is confident that, with the continued help of our partners, we will be able to work together to continue to improve the exhibit, Klusmire said.