To help commemorate the 2011 Manzanar Pilgrimage, the Eastern California Museum in Independence has installed special 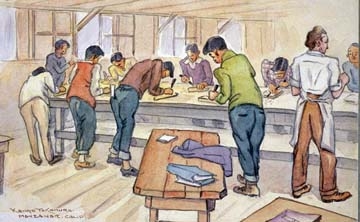 exhibits about camp life as depicted through watercolor paintings by Kango Takamura and black and white photographs by Toyo Miyatake. Both men had established, artistic careers before their internment at Manzanar, and both found ways to practice their art in camp. Upon release from camp, both men resumed their respective careers.

A dozen delicate and precise watercolors by Takamura depict “School Days” at Manzanar. The paintings provide a glimpse into the daily activities in classrooms, in the high school and elementary school, at the war relocation center.

Before World War II, Takamura worked Paramount Studios in New York before relocating to California and a job at RKO Studios as a photo re-toucher. During the run up to the war, his fellow workers supported him and sought to keep him from being taken to a relocation center after the bombing of Pearl Harbor. Their efforts were not successful, and Takamura was first sent to a Department of Justice Camp in Santa Fe, New Mexico, before being moved to Manzanar, where he lived with his wife and family from 1942 to 1945.
While at Manzanar, Takamura painted and sketched extensively in various media to record the daily life in the camp. He also taught art classes and was the head of the visual education museum for children.
After the war, he was released and went back to work at RKO until the studio closed in 1957.

The exhibit featuring a sampling of striking black and white photos taken by internee Toyo Miyatake also presents a look at daily camp life through the eye of an artist. The photos show families, street scenes, landscapes, group photos of children, and other camp scenes. Toyo’s son, Archie, crafted the fine-art prints from his father’s negatives.

Before the war, Toyo Miyatake ran a successful photo studio in Los Angeles. He was also a friend of well-known photographer Edward Weston. When the entire Miyatake family was relocated to Manzanar, Toyo used hand-made cameras to capture camp life. Later he was allowed to use open a photo studio and became the “official” photographer of Manzanar. His photos are an artistic and journalist record of the Manzanar experience. His photos have been featured with, and compared to the Manzanar photos of Ansel Adams and Dorthea Lange, among others.

We work to provide daily news to all of the Eastern Sierra, in the tradition of Eastern Sierra News Service and the Sierra Wave. We bring you daily happenings, local politics, crime, government dealings and fun stuff. Please contact us.
View all posts by News Staff →
Bureaucrat Beat: Out of gas, supersize and movie stars
Jury finds Leplat guilty of second degree murder