The elderly gentleman’s eyes sparkle a bit while a smile crosses his lips as he talks about moving carefully over the barbed wire fence under the cover of darkness, being careful not to drop his homemade fishing pole and tackle. He relates how he and other fisherman were sneaking out of the Manzanar War Relocation Center so they could breathe the fresh, free air of the towering Sierra Nevada mountains and enjoy the simple pleasures that come from fishing for trout in high country streams and lakes. 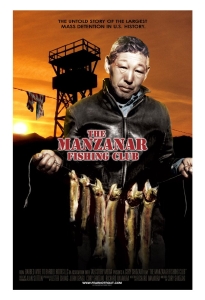 MANZANAR FISHING CLUB POSTER: The public is invited to a free screening of “The Manzanar Fishing Club,” at 7 p.m. on Saturday, March 15, at the Lone Pine Film History Museum. Filmmakers Cory Shiozaki and Richard Imamura will be on hand to discuss the film and take questions.

The personal stories of some of the fisherman who were among the 10,000 Japanese internees at Manzanar, put a human face on one of the more intriguing, little-known aspects of life in Manzanar during WW II: how a few courageous, hearty anglers defied the armed guards, barbed wire fences and searchlights to take back moments of dignity and freedom by the simple act of fishing.

By emphasizing those personal stories, the documentary film, “The Manzanar Fishing Club,” presents an uplifting tale of those who sought and found moments of freedom and adventure by escaping from the routine of camp life to fish in Eastern Sierra. Their act of defiance became well-known in camp, and put a unique new twist to the old saying, “Gone Fishing.”

As another Sierra fishing season looms, the public is invited to a free screening of “The Manzanar Fishing Club,” and to celebrate the universal appeal of trying to out-wit the region’s famous trout.

The film will be shown at 7 p.m. on Saturday, March 15, at the Lone Pine Film History Museum.

Filmmakers Cory Shiozaki and Richard Imamura will be on hand to discuss the film and take questions. Both men are avid fishermen, and both men’s parents were among the 120,000 Americans of Japanese descent confined in 10 Relocation Camps for the duration of WW II.

Shiozaki first conceived the idea of the film. The cinematographer and Eastern Sierra fishing guide became interested in the story of the Manzanar fisherman, and eventually created a walking tour and exhibit with photos and fishing-related artifacts showcasing Manzanar’s fishing history.

The project moved to the next level when fellow anglers and video production company principals Lester Chung and John Gengl proposed interviewing the surviving internee fishermen for a documentary film. Writer Richard Imamura pored over hours and hours of interviews and expanded the project from a 22-minute short into a feature length documentary. His script brought together what Shiozaki said he had intuitively known all along — that all of the fishermen’s stories touched, in one way or another, on a yearning to be free.

The full-length film features archival photos and newsreel footage tracing the events that lead to the internment of the West Coast’s Japanese, many of whom were American citizens, shortly after the attack on Pearl Harbor. The historical footage also shows construction of the camps, and provides a glimpse of what life was like for the internees.

In some cases, scenes are re-created to show how the Manzanar anglers got through the camps barbed wire fences, and details what equipment, bait and lures they used.

The film screening is being sponsored by the Eastern California Museum and the Metabolic Studio. The film project was supported by the California State Library/California Civil Liberties Public Education Program, the National Park Service/Japanese American Confinement Sites grant program, the Manzanar Committee and private donors.

We work to provide daily news to all of the Eastern Sierra, in the tradition of Eastern Sierra News Service and the Sierra Wave. We bring you daily happenings, local politics, crime, government dealings and fun stuff. Please contact us.
View all posts by News Staff →
Eight candidates for Mammoth Town Council
Three supervisors said ordinance too complex
1 Comment
Newest
Oldest Most Voted
Inline Feedbacks
View all comments

Excellent! I learned things I did not know. Wondered if I was sitting next to Wayne and didn’t know it 🙂