– Press release from the Manzanar Committee

LOS ANGELES — On February 3, the Manzanar Committee reiterated its opposition to any large-scale, industrial renewable energy development in the Owens Valley, especially that which would intrude upon the viewshed of the Manzanar National Historic Site. Further, the Committee renewed their call on the Inyo County Board of Supervisors to protect Manzanar and the Owens Valley from such development in perpetuity in their final Programmatic Environmental Impact Report (PEIR) for the County’s Renewable Energy General Plan Amendment (REGPA). 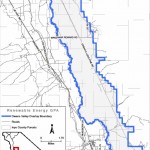 IInyo County may still be considering opening the marked area on this map, much of which is visible fron the Manzanar National Historic Site, to large-scale solar energy development.
IMAGE CREDIT: County of Inyo

The REGPA, which is in the hands of the County’s Board of Supervisors for final approval of its PEIR, defines Solar Energy Development Areas (SEDA) where large-scale renewable energy generating facilities could be built in Inyo County.

With Manzanar and the Owens Valley already facing a serious threat from the Los Angeles Department of Water and Power’s (LADWP) proposed Southern Owens Valley Solar Ranch (SOVSR), a 1,200-acre solar energy generating facility that would be built adjacent to Manzanar, Inyo County appears to be favoring opening the door to additional industrial solar energy development in the vicinity.

It should be noted that because LADWP is a governmental agency, Inyo County has no authority over them regarding the SOVSR. That would allow LADWP to build the SOVSR without the County having a say in the matter.

As such, the County’s plan could, conceivably, open the door to additional industrial solar energy facilities in the Owens Valley, completely destroying Manzanar’s viewshed.

Although County officials noted the impact that the Manzanar National Historic Site has on Inyo County in the draft PEIR, the document includes a glaring contradiction.

“This, as we have noted previously, and the authors of the draft PEIR reference, provides visitors a ‘…sense of isolation that was part of the psychological warfare perpetuated by the U.S. Government,’” added Embrey. “While this is indisputable, the report effectively contradicts itself by stating, ‘…[the] focus of visitors of the national historic site is generally inward and on the facilities within the site rather than on the surrounding areas and visual landscape.’”

“Not only does this opinion or assertion bear no resemblance to reality, but it also doesn’t reflect, in any way, the oral or written comments received by Inyo County during the REGPA process,” Embrey charged. “No one from the Manzanar Committee, the Manzanar NHS, or the general public stated that at any point in this process.”

“Given that, and with no source provided, we can only assume this is the opinion of the County officials/staff who authored the document, or of those who may have instructed staff to include it in the draft PEIR.”

Manzanar Committee Co-Chair Bruce Embrey reiterated that the issue is the location, not renewable energy.

“We’ve stated many times that it we are not opposed to solar energy, or other renewable energy sources,” said Embrey. “But the Owens Valley is the wrong place for such development, especially when other options exist.”

“As we’ve stated in the past, we stand with the Big Pine Paiute Tribe, the Bishop Paiute Tribe, the Fort Independence Indian Community of Paiute Indians, the Lone Pine Paiute-Shoshone Tribe, the Owens Valley Committee, and others in Inyo County in their demand that the Inyo County Board of Supervisors truly represent their constituents when they consider the REGPA. That includes protecting the Manzanar National Historic Site from intrusions into its viewshed.”

For reference, the Manzanar Committee’s full comments on the draft PEIR that were submitted to Inyo County are available for download at:http://blog.manzanarcommittee.org/2015/02/03/inyopeircomments.

I was stating that as a generalization across the countryregarding opposition. Its happening in the Coachella Valley right now…..How do the citizens of LA ‘benefit’ from DWP?….Energy isnt free.And DWP has to contract out to private energy companies to build the panel systems. Ever seen Kramer Junction? A private contractor… Read more »

and who would pay for all of the rooftop solar panels? Lets be honest, people are against the corporations that will profit from this…….that’s always the mantra of the eco waco left and that is a example of ignorance of econ 101,,

DWP isn’t a corporation. It’s a public agency, a department of a charter city that by law cannot turn a profit. The people who “profit” from this are not corporate execs but the citizens of the city the department serves.