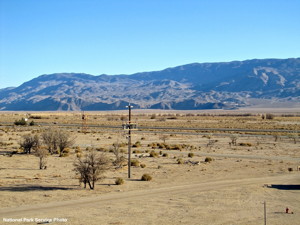 Looking east from the visitor’s center at Manzanar National Historic Site. The floor of the Owens Valley, along with the Inyo Mountains in the background, are visible. But this view could be destroyed by a massive solar energy generating station, proposed by the Los Angeles Department of Water and Power. National Park Service Photo

LOS ANGELES — On August 16, the Manzanar Committee announced its opposition to the Los Angeles Department of Water and Power’s (LADWP) proposed 1,200-acre Southern Owens Valley Solar Ranch, which would be constructed east of the Owens River, but in a direct line of sight with the Manzanar National Historic Site, which lies to the immediate west.

The proposed site would generate electricity that would be delivered to LADWP customers in Los Angeles. But generating that energy would result in the destruction of Manzanar’s historic solid waste dump, which has not undergone an archeological study. Equally important, the site’s approximately one million solar panels, along with buildings, large equipment, transformers, a substation, transmission lines, and much more, would destroy a significant portion of the historic landscape surrounding Manzanar National Historic Site.

“The importance of maintaining and enhancing the physical characteristics of the Manzanar National Historic Site cannot be downplayed or overlooked,” said Manzanar Committee Co- Chair Bruce Embrey. “One of the most powerful parts of Manzanar is the unobstructed view, and that many of the structures, gardens and other features of the World War II American concentration camp have not been bulldozed over or destroyed by ‘development.’

“Some of the best and most memorable parts of Manzanar have always been seeing the remnants of the camp set in contrast to the natural landscape of the area,” added Embrey. “The continued restoration of the gardens, the apple orchard, and other crucial archaeological aspects, including Manzanar’s World War II-era solid waste dump, which undoubtedly contains historically significant artifacts—none of that should be compromised for commercial exploitation.”

Embrey noted that while LADWP has supported the Manzanar Pilgrimage for many years, this proposal is yet another blot on their poor record regarding the site.

“LADWP has a long and checkered history regarding the establishment of the Manzanar National Historic Site,” Embrey stressed. “They have offered support over the years to the annual Manzanar Pilgrimage, led for decades by Sue Kunitomi Embrey. But the relationship between LADWP and the Manzanar Committee has been marked by serious and fundamental disagreements along the way.”

As a response to an LADWP-supported bill in Congress that would have established a locally administered memorial at Manzanar, rather than a National Historic Site, in an October 5, 1991 letter to the editor, Sue Kunitomi Embrey, one of the founders of the Manzanar Pilgrimage and the Manzanar Committee, wrote in the Los Angeles Times:

“The DWP proposal is highly inappropriate and totally unacceptable to the Manzanar Committee for many reasons, the important one being that Manzanar has national significance, and local jurisdiction does not give Manzanar the integrity and national recognition it deserves.”

More than twenty years later, LADWP’s insensitivity and disregard for Manzanar, not to mention the people who were unjustly incarcerated there, and their families, continues.

“The very idea that any land in or around the Manzanar National Historic Site could be used for a massive generating facility would not harm the ongoing efforts to preserve and understand the tragedy of justice that occurred there is simply beyond insensitive, and it’s not just insensitive to the Japanese American community, the survivors of America’s concentration camps and their families,” Embrey lamented. “That gross insensitivity extends to the efforts of the National Park Service, and others who have worked so hard to bring this brief, but essential, part of American History to light.”

“George Santayana said, “those who cannot remember the past are doomed to repeat it,” Embrey added. “This is true for our nation, and for the LADWP. Their proposed solar farm will severely harm efforts to remember our past.”

“The long-term, negative impact on the Manzanar National Historic Site cannot be understated. We call on the Inyo County Board of Supervisors, as well as the LADWP, to revisit the proposal and find another, more suitable location for the proposed solar generating station.

The Manzanar Committee is dedicated to educating and raising public awareness about the incarceration and violation of civil rights of persons of Japanese ancestry during World War II and to the continuing struggle of all peoples when Constitutional rights are in danger. A non-profit organization that has sponsored the annual Manzanar Pilgrimage since 1969, along with other educational programs, the Manzanar Committee has also played a key role in the establishment and continued development of the Manzanar National Historic Site. For more information, send e-mail to [email protected], call (323) 662-5102, or check their blog at http://blog.manzanarcommittee.org.