Recently, the National Park Service announced $15 million in support of 69 projects in 63 parks, including $74,547 to Manzanar National Historic Site to construct a historically accurate latrine. The non-working latrine and its exhibits will complement the other buildings in Block 14. The Block 14 “demonstration block” gives visitors a sense of the living conditions endured by more than 11,000 Japanese Americans in Manzanar during World War II. The funding will be matched by more than $150,000 in donations from Friends of Manzanar and private donors. 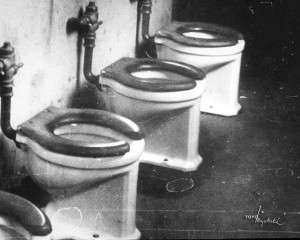 The National Park Service’s Centennial Challenge Program leverages partnerships to improve visitor services, support outreach to new audiences, and reinvigorate national parks while forging connections with communities. Congress provided $15 million for the Centennial Challenge projects, which will be matched by almost $33 million from more than 90 park partners. The 69 projects total almost $48 million and are located at 63 parks in 38 states, the District of Columbia, and the U.S. Virgin Islands.

“We are pleased to receive this Centennial Challenge funding and appreciate the generosity of donors,” Manzanar Superintendent Bernadette Johnson said. “As I have talked with former incarcerees, they recall being forced to use communal latrines as one of the most degrading experiences in Manzanar. The desire to see a latrine building reconstructed with exhibits is a frequent comment from former incarcerees as well as site visitors.”

The reconstructed latrine, with ten toilets, a sink and shower room, will powerfully illustrate deeply personal experiences, such as those recalled by Mary Tsukamoto decades later: “I guess the Army’s latrine is the same everywhere. For us women and children this was something which we just couldn’t… it was just a shock. I remember we got sick… we couldn’t go… we didn’t want to go. It was smelly and it was dirty. In the shower the water was poured over you, and there were no partitions, and it was so cramped that we almost touched each other. It was very humiliating.”

Congress established Manzanar National Historic Site in 1992, the result of decades of efforts by Japanese Americans and others. Since then, the National Park Service (NPS) has worked with scores of stakeholders to preserve and interpret Manzanar and its stories. Today, more than 90,000 annual visitors explore the personal experiences of individuals, families, and communities incarcerated at Manzanar. The restored camp auditorium serves as a visitor center and houses extensive exhibits. Nearby, a World War II-era mess hall and two reconstructed barracks highlight the challenges of daily life. An auto tour road circles the site, highlighting Japanese gardens, historic orchards, the cemetery, and more.

About the National Park Service

More than 20,000 National Park Service employees care for America’s 409 national parks and work with communities across the nation to help preserve local history and create close-to-home recreational opportunities. Visit us at www.nps.gov, on Facebook www.facebook.com/nationalparkservice, Twitter www.twitter.com/natlparkservice, and YouTube www.youtube.com/nationalparkservice.

Manzanar is a very Historical site..This is a great idea ….those against it,may I ask,are you against ALL of the NPS funds for the 69 projects in the 63 parks,thinking the money could be “better spent”……or are you just against this one, where the thousands of Japanese/American citizens were INCARCERATED… Read more »

Lower, I think Mamzanar and the people that run it deserve my respect. What this place stands for is a true reminder of what was once really wrong about our world. I sure hope people won’t think I was agianst Mamzanar because Im critical of our park service folks.

The idea of a memorial or historical marker, exhibit etc makes sense to portray events that occurred somewhere. That is enough. Why do exact replicas of bunk houses or latrines serve to accomplish? All countries that I can think of had sordid pasts and human rights abuses. The Japanese are… Read more »

At least their not spending it on closing more roads.

What a crappy deal for the taxpayers. Those funds could have helped out a lot of veterans.

Why Not use the money to put up a monument honoring the hundreds of U.S Troops who were Decapitated after capture by Japanese Officers with Samurai Swords .

Wow, $224,000 for a non-working toilet, I hope our local contractors and workers get a taste of this pork!