On July 29, 2018, at approximately 1:30 pm, Mono County Sheriff’s Office (MCSO) Search and Rescue (SAR) received a call from a pair of climbers in the area of the north ridge of Mount Conness. 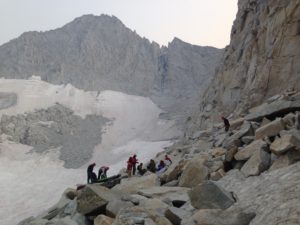 The pair explained that they could hear someone screaming for help approximately 1/2 to 3/4 miles northeast of their location. They were unsure of the exact location of the voice but provided SAR with an approximate GPS location, as well as a photo from their vantage point showing where the plea for help was coming from.

The pair further explained that they saw two persons scramble to the area the yelling was coming from and began waving something red. They attempted to communicate via shouting, but the only intelligible response they could hear was “help.” 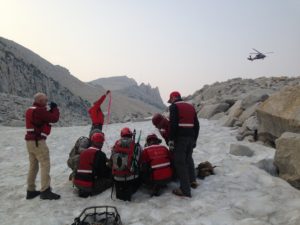 The approximate location of the victim was around 11,400 feet elevation near the base of the Conness Glacier. An additional climber on the east side of Mount Conness also relayed similar information to Yosemite Dispatch who forwarded the additional information to MCSO dispatch.

Twelve (12) SAR personnel responded and readied at the Saddlebag Lake trailhead, and the SAR Team then began the hike into the area to attempt to locate and assist the injured person. CHP Helicopter H40 was requested to the area to conduct an aerial search of the area as well. 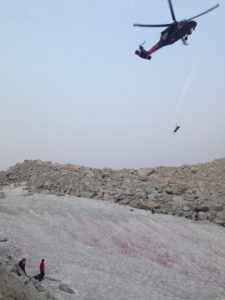 H40 launched but shortly after was forced to return to their base due to the heavy smoke and low visibility in the area. A request was made to the California Department of Emergency Services (CalOES) for a helicopter capable of handling both the search and possible rescue of the injured person. CalOES was able to locate a National Guard UH-60 Blackhawk (Guard 823) on fire assignment in the Yosemite area that was available to assist.

At approximately 4:30 pm, following the instructions/GPS information from the initial RPs, SAR personnel made contact with two other hikers that had heard the cries for help. These were the two hikers initially observed by the first reporters. The two hikers guided SAR personnel to a solo climber who had his leg trapped between two large granite slabs. The two hikers explained that they were a short distance away when they heard the yelling and scrambled over to the victim. 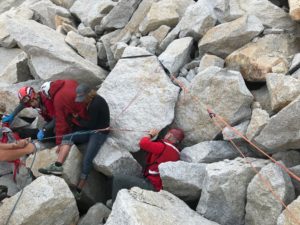 Upon realizing what occurred, they activated their own SPOT device to summon help, then provided basic first aid medical care to control bleeding. They stayed with
and provided reassurance to the victim for several hours prior to SAR arriving.

After a brief interview with the victim, SAR personnel learned that the solo climber was
scrambling up the talus field to the base of a climbing route when the large slab rock he was climbing gave way, pinning his leg against the boulder below. He began screaming for help until two hikers located and stayed with him.

Guard 823 arrived overhead, but due to the altitude, swirling winds and talus/glacial terrain, they were unable to land nearby. Using their hoist, they lowered their onboard paramedic to the scene to assist the SAR emergency medical technicians with advanced medical care.

Using their rope systems operated only by manpower, SAR personnel were able to move the massive slab rock enough to free the victim’s leg. The victim was quickly readied for helicopter evacuation, moved to a nearby snowfield and hoisted to Guard 823.

Guard 823 flew the patient to Lee Vining Airport to rendezvous with Careflight. Careflight was unable to fly to the Lee Vining airport due to heavy smoke and low visibility but was able to make it as far south as Bridgeport.

Mono County Medic 2 was on standby at the Lee Vining Airport and provided immediate ground transport for the victim from Guard 823 to Careflight in
Bridgeport.

MCSO SAR would like to extend a thank you to all the cooperating agencies including CHP H40, CalOES, National Guard 823, Careflight, Medic 2, and Yosemite dispatch.

A bigger thank you goes to the multiple callers reporting the incident, especially the initial climbing pair who provided an extremely accurate location from a long distance away as well as the two hikers that reacted to the calls for help, located and stayed with the victim until SAR arrived.

It is amazing and truly humbling what perfect strangers are willing to do for others in their time of need.

A REALLY good job by all agencies involved….and the hikers that heard the cries and helped.