RE: It was a busy weekend for the Mono County Sheriff Search and Rescue (SAR) Team 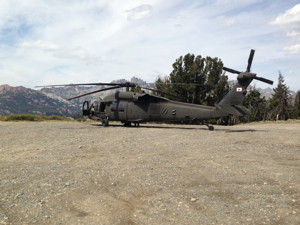 On the morning of Saturday, August 17, 2013, at approximately 10:00am, Mono County Sheriff’s Dispatch received a call regarding a fallen climber with potential arm and leg injuries in the Minarets. A 57 year-old climber, from the Santa Clara area, was climbing Clyde Minaret when he fell approximately 30-60 feet injuring his left arm and leg. He could not continue the climb or get himself off the mountain due to the impact of the fall. The Mono County Sheriff Search and Rescue (SAR) team was called to aid Madeira County in a mutual aid rescue of the fallen climber. Due to the location of the climber, the SAR team requested air support. A Blackhawk helicopter from the Army Air National Guard was provided for assistance. With the steep terrain near the climbing site, the helicopter was unable to directly hoist the injured climber from his location. The helicopter inserted a technical/medical climbing team at the bottom of the climbing route. The team was able to climb to the injured climber, conduct a medical assessment, and splint the injuries. The team was able to then lower him to the base of the climbing route. The helicopter was unable to provide any more assistance due to the afternoon changing to night and returned the morning of Sunday, August 18th. The helicopter was able to extricate the injured climber and the SAR team and air evacuate them to the Minaret Vista landing zone. The injured climber was met by Mono County Paramedics and transferred to Mammoth Hospital for further treatment of his injuries.

On the very early morning of Sunday, August 18, 2013, at approximately midnight, Mono County Sheriff’s Dispatch received a call regarding an injured hiker near the Marie Lakes area. A 55 year-old hiker, and his friend, were hiking in the Marie Lakes area when the hiker fell approximately 15 feet on steep rock and terrain with a heavy impact on his pelvis region. The hiker was able to hike back to Marie Lake where he couldn’t continue the hike out. His friend left the area, found some other hikers with a cell phone, and was able to call 911. A second response team of the Mono County Sheriff’s Search and Rescue (SAR) team was dispatched to rescue the injured hiker. A ground team hiked to the injured hiker to find that he had suffered internal injuries. After the Blackhawk Air Army National Guard helicopter cleared the call of the injured climber, it assisted the SAR team in extricating the hiker to the Minaret Vista landing zone. The injured hiker was met by Mono County Paramedics and transferred to Mammoth Hospital for treatment of his internal injuries.

The SAR team had approximately half a dozen standby calls throughout the weekend. Fortunately, these standby calls did not become official call outs as the subjects were either able to self-extricate from their location without needing further assistance or medical attention or they returned safely home from their adventures in the Eastern Sierra. Please remember if you are hiking, climbing, or enjoying other outdoor activities throughout the areas of the Eastern Sierra, to tell someone where you are going and an approximate time of when you think you will return. Or, enjoy your outdoor activities with a friend or group in case you need help.