By News Staff on March 23, 2020 in Government Agencies/Utilities, Press Release 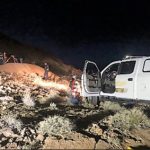 On Saturday, March 21, four agencies teamed up to rescue a 60-year-old Santee man who fell down a mineshaft in Death Valley early Friday, suffering severe head injuries, San Bernardino authorities said. It was not clear how far the man fell.

The San Bernardino County Sheriff’s Department reported that it was notified about 12:30 a.m. that its help was needed in helping a man who had fallen down a mine shaft, the agency said in the following statement:

SUMMARY: On Saturday, March 21, 2020 at 12:30 a.m. the San Bernardino County Sheriff’s Department Emergency Operations Division, Volunteer Forces Unit received a request form the California Office of Emergency Services for assistance.  Inyo County Sheriff’s Department called for additional resources to assist in rescuing Randolf Blattler, who had fallen down a mine shaft in the desert in Death Valley.  Members of the Sheriff’s Cave/Mine Rescue Team responded to the scene along with teams from Inyo County, Las Vegas and Pahrump, Nevada.”

Blatter was rushed to a Las Vegas hospital by helicopter suffering severe head trauma from the fall, officials said. An update on his condition was not available.