On Friday, May 13, at approximately 1 p.m., the Mono County Sheriff’s Office received a call from a group of campers at Crowley Lake reporting that one member of their group was missing. 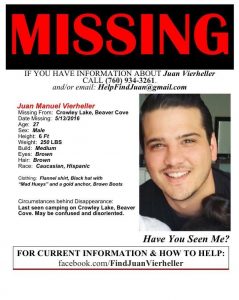 The missing person, Juan Manuel Vierheller, age 27, of La Habra, had last been seen in the very early hours of Friday morning at their campsite near the shore of Beaver Cove at Crowley Lake.

Deputies were dispatched to the missing person’s last known location, and they conducted a search of the immediate area. They found no sign of him in the surrounding terrain, but there were indications that he went into the waters of Crowley Lake.

Mono County Sheriff’s Search and Rescue (SAR) responded to assist with the search, and two Sheriff boats were deployed onto the water. The search continued until dark, but Vierheller was not located.

All of these resources were utilized during the daylight hours of the weekend, scouring land and water for any sign of Vierheller. Despite these efforts, by the evening of Sunday, May 15, Vierheller was not found, and the search was called off.

The possibility remains that he walked away from the campsite, and until he is located, this investigation will be an open Missing Person case.