By News Staff on May 30, 2013 in Government Agencies/Utilities

Man Convicted of 2009 Forest Fire from Rex Emerson
(via http://www.recorderonline.com/articles/set-57226-forest-area.html ) 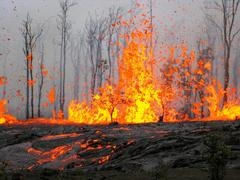 Ernesto Sanchez, 24, of Los Angeles was found guilty in a jury trial Thursday for recklessly causing a fire in Sequoia National Forest in the Kernville area, near the bank of the Kern River on June 27, 2009.

Several individuals were camping in that area, and while there, another group of people set up camp next to their site. Sanchez was a part of this second group.

Witnesses testified at trial that during the evening hours, Sanchez began to set off fireworks. The summer temperature at the time was hovering near the 90 degree mark and the grass area was brown and dry. A sign was posted clearly warning visiting campers of the risk of forest fires.

After the defendant set off the first firework, several campers yelled at him to stop. The defendant laughed and said “I saved the best one for last” and proceeded to set off a second firework, which sailed over the Kern River into adjacent land. This device subsequently caused a fire which engulfed approximately 200 acres of forest land, with damages in excess of $460,000.

Sanchez will be sentenced on Nov. 7, and he could face up to three years in prison for his crime.

We work to provide daily news to all of the Eastern Sierra, in the tradition of Eastern Sierra News Service and the Sierra Wave. We bring you daily happenings, local politics, crime, government dealings and fun stuff. Please contact us.
View all posts by News Staff →
Climate change/ global warming: the first in a series
Mono County government retirements
11 Comments
Newest
Oldest Most Voted
Inline Feedbacks
View all comments

Something else I noticed. This case was tried back in 2012 and the guilty verdict was read on 27 September 2012 at Tulare County Superior Court Department 12. Why does this article claim the verdict was delivered only last Thursday? What kind of poor reporting is this? Here is the… Read more »

I see what you are saying. Rex Emerson of Lake Isabella Online, who has forwarded numerous stories, submitted this one. Check it out –
http://www.recorderonline.com/articles/set-57226-forest-area.html.
BK

Is it just me or does the photo accompanying the article look more like a volcanic eruption than a forest fire?

give the guy a break,he had to shoot the fireworks to see where his crops were

I wonder how a fire in an undeveloped forest could cause over $400K worth of damage?

A heavy lift helicopter such as a BV234 Chinook or Sikorsky S64 Skycrane cost about $10,000 per hour, not per day but per hour, to operate. They burn about 2200 pounds per hour of fuel and require many man hours of labor each night. Even a small Bell 206 Jetranger… Read more »

Federal Government in general for that matter.
Go Private Sector!!!

Those helicopters are all operated by private contractors such as Columbia Helicopters, Erickson Aircrane, Evergreen Aviation, Carson City Helicopters, etc. There is nothing about aviation that is cheap and helos tend to cost on average three times the cost per hour of a similar weight fixed wing aircraft. The virtue… Read more »

June of 2009? Wow, justice sure does lag.
I hope he gets the maximum prison time and probation to include community service.
Perhaps that community service could be reducing fuel in the area where he committed his crime. Scary how stupid people can be.