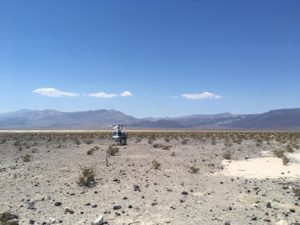 The hiker’s fiancé reported him overdue to DVNP earlier that morning and
indicated that he may be day-hiking in that area. A hasty ground search around the vehicle was conducted by the Ranger; however the hiker was not located.
On July 17th around 9:00am an Inyo Sheriff’s Search and Rescue Coordinator and CHP Inland Air Operations helicopter H-82 out of Apple Valley began aerial search reconnaissance. DVNP personnel were on scene near the vehicle providing ground search assistance and ground communications.
At approximately 9:45am, the aerial search team located personal items including a backpack, empty water bottles and printed information referencing hiking Panamint Butte, which is about one mile east of the vehicle on the slopes of Panamint Butte.
Shortly after noon, the aerial search team located more personal items about
2000 feet southwest of the backpack. While circling those items, they also located the missing hiker’s body in a wash about 500 feet southeast of the items.
The hiker was found deceased and transported by helicopter to Lone Pine, where he was transferred to the custody of the Inyo County Coroner’s Office.
The hiker was identified as Peter Rhoad, a 57-year old man from Huntington Beach, CA. The autopsy conducted on July 19th by the Inyo County Deputy Coroner, determined
that Mr. Rhoad’s cause of death was due to a fall causing a skull fracture, which resulted in a subdural hematoma, prior to succumbing to elements.