By News Staff on April 25, 2014 in Government Agencies/Utilities 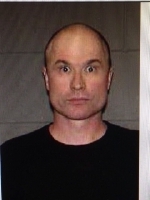 On Thursday, April 24 at approximately 5:30 p.m., Steve Searles, the Wildlife Specialist for the Town of Mammoth Lakes, also known as the “Bear Whisperer,” was parked in his marked truck on Frontage Road in front of Schat’s Bakery. Mr. Searles was parked so that he could make a phone call on his mobile phone. While on the phone, he was approached by Brian Stacy Macklin, age 46 and a resident of Mammoth Lakes. Macklin tried to open the locked passenger door and when unable, went around to the driver’s side and was unsuccessful in opening the locked driver’s door. Macklin then began punching the side window and kicking the door while yelling obscenities to Searles and complaining about him using his cell phone.

Officer Daniel Hansen responded and upon arrival, Macklin turned his attention to the officer and aggressively approached him with clenched fists. When the officer attempted to handcuff Macklin, he became physically and aggressively resistive. After a struggle, Officer Hansen, with the assistance of Wildlife Specialist Searles, handcuffed Macklin.

Ms. Dessert then told the officer her observations. She parked near Searles’ truck and while still in her car, was approached by Macklin who reached into her car and attempted to take her cell phone from her. She leaned away and Macklin said, “Did you see that cop on his cell phone? He’s gonna get brain cancer?” Macklin again reached into Dessert’s car and grabbed her hair and hit her on the side of the head. Macklin then went to Searles’ truck and tried to enter, and began punching and kicking it.

There were no injuries. Macklin was arrested for Attempt Felony Vandalism, Attempt Robbery, Resisting Arrest, Misdemeanor Battery, and Drunk in Public. He was booked at Mono County Jail with a bail of $100,000.

The article says he was charged with several crimes, including being drunk in public. Since when does being drunk and unruly mean mental illness?

This is the legacy of Ronald Reagan’s governorship of California, closing the state mental hospitals and throwing the disabled out on the community. Bet we all saved a lot of money over the years. Right?

Yeah, but we made the money back with grazing fees. You know, like what Bundy is not paying… http://www.presidency.ucsb.edu/ws/?pid=36873 By the authority vested in me as President by the Constitution and laws of the United States of America, and in order to provide for establishment of appropriate fees for the… Read more »

Read somewhere that this Bundy made some really bad racist remarks….bad enough to where even a FOX NEWS reporter objected to it,and how his remarks weren’t a topic when other FOX NEWS reporters were telling the story…I’ll have top follow up on the story to see what it’s all about,but… Read more »

Wow! Going back almost 50 years to blame Reagan for this p.o.s.?Who was in the state assembly and who ran the commitees back then?. Just curious. This guy wasn’t alive then. Id say blame it on the so-called progressives[you know, the ones who have the monopoly on state sponsored “compassion”]… Read more »

It’s a legitimate statement. Reagan’s policy set the tone for how we deal with the mentally ill and troubled into the present. We’re not doing a very good job of it. But, go ahead and take politics out of it and consider what is best for people? The ongoing string… Read more »

Got a question….and hoping Chief Watson sees this and can respond….Isn’t it true if someone (allegedly) tries to gain entrance into your vehicle while it is occupied you have the right to use deadly force to keep it from happening ?…I know it is in Oregon,with a big problem of… Read more »

Wayne ,just don’t shot a bear and you won’t get charged.

Chief Watson…..Just out of curiosity,what are some of the circumstances that would warrant deadly force ?….I’m keeping up with that trial,I think in Minnesota,where that 65 year old “war hero” shot and killed the two teen-agers that broke into his home,while he was hiding and waiting in the basement….with two… Read more »

Thanks for the question, Wayne. Some people believe the myth that if an individual breaks into your home, you are automatically justified in using deadly force. That’s not accurate. Each situation is judged independently based on the totality of circumstances and what is in the mind of the person who… Read more »

Chief Watson…The trial I mentioned is taking place in Little Falls,Minn…Byron Smith shot these two teen-agers back in 2012,and finally going to trial.Those covering the trial are saying he’d have a better chance of being found not guilty,or maybe even no charges filed at all if he had limited his… Read more »

Chief Watson…….The jury is back with the verdict in that case I mentioned…in less than 5 hours….Byron Smith was found guilty of murder…..life in prison…Can’t help but think his big,stupid mouth,as well as his actions that day drew very little sympathy from the jury….apparently having found out maybe a break-in… Read more »

Sorry, but if someone breaks into my house, they aren’t walking out. They aren’t there to have tea and crumpets with me, obviously. I’m going to use whatever force is necessary to protect myself and my loved ones. I have a stalker, so I don’t have the luxury of weighing… Read more »

Gistine….Personally,I agree with you on most of what your saying..but,like Chief Watson stated,each case is looked at differently…and I’m betting in most of those cases,if a homeowner is surprised by an intruder and uses deadly force against the threat,it might go before a grand jury to see if you should… Read more »

Especially if you live in a rural area where law enforcement response could take more time then you have.

Better to be judged by 12 than carried by six

Basically the law leaves you hanging. One can’t know what weapons an intruder has. You can’t confront them for that reason. I would expect to be able to shoot an intruder coming into the room that I have taken refuge in. Add to that, if they have a weapon (which… Read more »

Sugar Magnolia…..Not so sure about the law leaving you hanging….I think more so just common sense…In the case I mentioned above,Byron Smith fired multiple shots at and into the two teenagers.And then finished them off with a shot to each of their heads….all the while knowing this was going to… Read more »

I couldn’t agree with you more, sugar magnolia.

Hey Joe, some of them not only vote but are candidates for council or have been on the council.

I thought Mammoth was completely safe. Probably should make public safety more of a priority.

It seems as if Steve Searles is a magnet for strange people.

sounds like a mental break…such a shame. Dealing with people not in their right mind is difficult. I hope Angela wasn’t hurt badly.

They live amongst us…. and they vote!