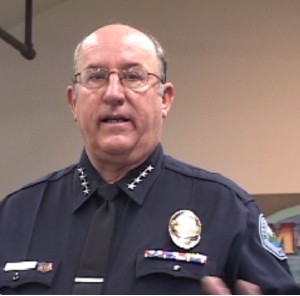 Clark said the Council wants Chief Watson to look at the police department staffing levels, schedules and even the possibility of contracting with Mono County for partial or total law enforcement service.

The Council also wants Watson to address the peak loads of people in town and how to deal with that in terms of police coverage. Clark said the goal of the Interim Chief is to provide independent judgment during his year of service based on his extensive experience in law enforcement.

We spoke with Chief Watson yesterday. As he said, he’s on a “steep learning curve.” The Chief said his contract with the Town over the next year says he will work with the Town Manager on recommendations related to staffing and scheduling, command structure, coordinating with the Mono Sheriff and CHP, the School Resource Officer, the police facility, the wildlife specialist and selection of a permanent police chief. All of this on top of daily management of the police department.

That daily job now includes work to save money in the budget. Chief Watson said the town manager has asked departments to look for ways to save a substantial amount of money. In the originally proposed budget for 2010-11, two positions are cut from the Mammoth Police Department – a sergeant’s position and a police officer position. The lieutenant’s position is still in the budget but currently frozen.

Chief Watson said that he is inclined to say the Town should fill the lieutenant job or a supervisory position. This will be part of his budget review. Chief Watson did say that every day, the Mammoth Police Department must have two people on at all times. He called the department “minimally staffed.” Watson did say that over all he is pleased with the caliber of people in the department.

We work to provide daily news to all of the Eastern Sierra, in the tradition of Eastern Sierra News Service and the Sierra Wave. We bring you daily happenings, local politics, crime, government dealings and fun stuff. Please contact us.
View all posts by News Staff →
Online Charter School for Local Students
Small Fires in the Sierra May Add Haze