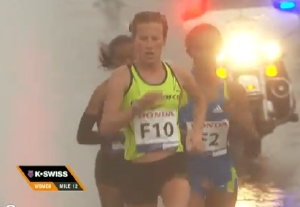 The Eastern Sierra hit big news in Los Angeles over the week-end. Mammoth Track Club’s Amy Hastings captured second place . In her first attempt at the marathon distance, Hastings clocked a time of 2:27:03 on Sunday morning.

Hastings led the elite women’s division for much of the race until winner, Buzunesh Deba passed her on mile 21. Hastings, a member of the Mammoth Lakes training group, has now qualified for the 2012 U.S. Olympic Trials Marathon, according to reports.

Hastings graduated from Arizona State in 2007. Race observers said that Mammoth Track Club Coach Terrence Mahon built Hastings up from a 5k/10k track runner to a road racer with the strength to compete well at the marathon distance.

We work to provide daily news to all of the Eastern Sierra, in the tradition of Eastern Sierra News Service and the Sierra Wave. We bring you daily happenings, local politics, crime, government dealings and fun stuff. Please contact us.
View all posts by News Staff →
School Superintendent sheds light on cause of Big Pine fire
Mammoth wildlife committee will meet