By News Staff on July 3, 2012 in Government Agencies/Utilities 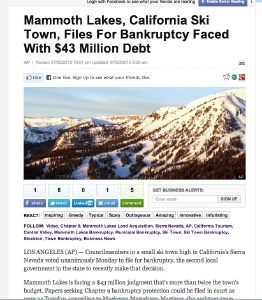 After news of Mammoth Lakes’ bankruptcy hit the wires and news outlets nationwide, MLLA’s lawyer confirmed the company will fight.

While the Town of Mammoth prepared to file for bankruptcy protection, a Mammoth Lakes Land Acquisition attorney made it clear that MLLA will fight that bankruptcy, doesn’t think Mammoth is eligible for bankruptcy, and maintains that Town officials have refused to accept the responsibility to pay their debt.

Dan Brockett has handled the MLLA lawsuit from the beginning. He said of Mammoth, “We don’t think they are eligible for bankruptcy. They didn’t negotiate in good faith, and they are not insolvent.” Brockett pointed to MLLA’s offer in March for the Town to pay its debt at around $2.7 million per year over 30 years, with payment adjustments according to the snow year.

Brockett said, “We made other offers they never responded to. No one on the Town Council wants to take responsibility. We’ve been trying to get them to since 2006,” said the attorney. He added that Town officials think that “some judge in a black robe is going to bail them out when the courts have been nothing but critical of the Town’s behavior.”

Bottom line for MLLA – Mammoth is not entitled to file for bankruptcy unless they’re insolvent, and they’re not insolvent. Brockett went on to say that MLLA’s March proposal was “affordable.” He said, “They’re going to maneuver and cook their books to show they’re poor.”

When asked to respond to the fact that the Town of Mammoth has dealt with budget deficits, including this year’s nearly $3 million dollar shortfall, Brockett said it was a bad snow year. “We’re not asking them to pay it all in one bad year or even ten years. We’re talking about 30 years. We’ll work with them.” Brockett said MLLA gave Mammoth a workable offer and “They never responded. Who’s in bad faith?” he said.

Town of Mammoth lawyers and officials have said that in fact MLLA has refused to mediate and work with the Town toward a settlement. Attorney Zack Clement, representing Mammoth, said at Monday’s Town Council meeting that he and others asked MLLA to participate in mediation at least six times.

Brockett points to what MLLA maintains is bad faith dealing on the part of the Town. He said Mammoth made MLLA an offer six months ago of about $20 million over a period of 10 or 15 years and then three weeks later rescinded the offer. He said the Town’s offer was something like $3 million up front and $17 million over time.

The MLLA attorney said another issue is whether Mammoth can issue bonds, raise taxes or fees to pay their big debt. He brought up a possible ski lift tax.

What about the fact that MLLA steadfastly refused to go to Mammoth’s 60-day mediation? Brockett said, “We haven’t gone to mediation because we knew it would go nowhere considering the history.” Brockett added that MLLA would have gone to mediation if Mammoth had responded to their offer in March and provided additional financial information. He says the Town would do neither.

When asked to respond to community pain over the $43 million debt, Brockett said, “We tried to settle with them before the trial. They made a calculated risk. I feel badly for the Town,” he said. Brockett declined to say how much the settlement might have been back then in 2006. Is it all unfair? Brockett said a jury of Mono County citizens were the ones who handed down a $30 million judgment that has now grown through interest and attorneys’ fees to $43 million.

We spoke to Brockett at a late hour yesterday and contacted Town officials for comment on MLLA’s position. We hope to hear from them today.

Great reporting, Benett, on this and your other bankruptcy stories this week. You’ve got both sides talking their heads off. Don’t they know to keep quiet and take their case before the judge? Town management should have stood by its July 2nd press release, probably reviewed by its attorneys, and… Read more »

It’s my understanding that the Town would come up with $400,000. MMSA would pay $300,000.
I believe Mammoth Tourism may get funds from the Town and others. All this is currently
up in the air.
Benett

Agreed, that was the story. But the story includes that MMSA won’t kick in $300K. Either MMSA will only pay that amount, or they will pay nothing, leaving the TOML on the hook for the whole amount. This issue is not resolved in the reporting so far.

Folks, We have good people running this town and I’m pretty sure they had the best intentions when they were making the decisions. And yes, some may have benefitted financially but if that were the case then the town would have benefitted 10 times over. I’m not saying or agreeing… Read more »

SierraFan- talk about the blind leading the blind. Mammoth even found a way to shut down June Lake. Better hope you win the water war.

Corruption - no good!
Reply to  SierraFan

It was a good move to stop Eastman in his tracks from getting his future son-in-law into the airport business during the whole ugly fiasco. This is the sort of thing (nepotis) why other municipalities in the U.S. are writing laws into their town by-laws to prevent. As the other… Read more »

Who are these great people you speak of? What was the great job? What have they really accomplished? Whatever was done before led them to this day. MLLA is just rubbing the towns nose in it one more time. The town has had almost 30 years to get its act… Read more »

Why isn’t there an anti-corruption town ordinance for town council members?
This would make it illegal to accept under the table monies, favors, percentages, gifts, outlawing nepotism …
Let’s face it. Until something like this is even discussed – the system in place will continue to be a corrupt one.

Looking forward to read about TOML suffering: if you don’t like what’s happening then find those you elected earlier who are responsible for that, hang them up – you’ll feel better and your current elected leaders will behave. LOL!

Give us our Effing money now!

Hey Ken Warner, Where were you the past four or so years at all the Town Council hearings? Not one peep from any of you. Instead, only rants in local news blogs at how MLLA etal are screwing over the TOML and how you can save the TOML with your… Read more »

great news -NOT
Reply to  Rick

I was there. If you recall the town council said nothing insisted that the town was in the right. The judge was wrong the jury was wrong. Everyone was wrong but the town. I had conversations with all those involved. There was nothing to say or do.They just would not… Read more »

This could have been completely resolved some three or four years ago at the initial law suit court hearings, The TOML refused to follow the direction of their counsel and did not file a counter offer. Instead, the TOML Leadership and it’s arrogance, told the court they refuse to pay… Read more »

One point of clarification. Municipal Bankruptcy is Chapter 9.
Benett

Oh I’m sure Brockett and MLLA are crying all the way to the bank over the town’s pain. What the council did was absurd, underhanded and stupid. What MLLA continues to do is classic American greed. MLLA change your name to something else, you don’t deserve to have our town’s… Read more »

Bad Faith was Terry B who knew the project would never happen… reading what some lame lawyer says is a waste of our time. Of course they want their money from a project the feds ban in their own writing. Talk about bad faith Terry and his pals at MMLA… Read more »

“The MLLA attorney said another issue is whether Mammoth can issue bonds, raise taxes or fees to pay their big debt. He brought up a possible ski lift tax.” Wait a minute. There’s about 20-30 people who over the years since the first idea of developing the airport are responsible… Read more »

Ken, haven’t you elected them?

“Brockett pointed to MLLA’s offer in March for the Town to pay its debt at around $2.7 million per year over 30 years, with payment adjustments according to the snow year.” That;’s $81 million. The bankruptcy judge could order that payment plan. A $2-$3 million dollar per year payment is… Read more »

The judge ( as well as the creditors ) have limited authority in Chapter 9 due to the 10th amendment and various supreme court rulings.

Ah, the pitchforks come out as if the main problem simply is in finding the right witches to burn at the stake. Apparently you are unaware that public servants doing their jobs, however poorly, are immune from civil suits unless they have committed outright criminal fraud.