As the March 12 deadline for putting items on the June 8 ballot looms closer, the Mammoth Lakes Town Council is still 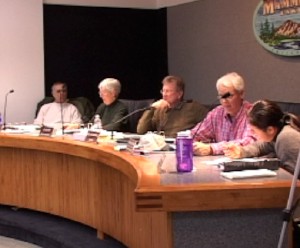 reviewing the extension of the Utility Users Tax, or UUT, which sunsets in June 2011. At their Feb. 17 meeting, Council approved introduction of an ordinance repealing the UUT sunset clause and setting the tax rate, subject to ratification by the voters. It has been suggested that the tax rate be dropped from the current rate of 2.5 percent to 2.0 percent. Council will make a final decision about this at their March 3 meeting, or at a special meeting prior to March 12.

The Town spent $16,000 with Godbe Research to poll community members on whether or not they would support an extension of the tax. Official results were still being tabulated and will be presented to Council at their March 3 meeting, but unofficially Town Manager Rob Clark explained that the poll had surveyed 200 people, 50 of which were considered would-be voters.

A memorandum written by Clark stated, “According to the preliminary results of a poll of voters conducted by Godbe Research, 58 percent of the voters of Mammoth Lakes said they would support an extension of the Utility Users Tax.”

Councilmember Jo Bacon stated that the discussion at the March 3 hearing should focus on and nail down what the tax, if approved by voters, would be spent on. Until now, the tax money collected has been used to pay off debt, but the debt will be gone when the tax sunsets in 2011, If the tax continues, the money could be used for other town projects.

Mayor Pro Tem John Eastman stated that even though he was approving introduction of the ordinance, he was not in support of extending the tax.

“I have not found one voter willing to support the extension,” Eastman said.

We work to provide daily news to all of the Eastern Sierra, in the tradition of Eastern Sierra News Service and the Sierra Wave. We bring you daily happenings, local politics, crime, government dealings and fun stuff. Please contact us.
View all posts by News Staff →
Mammoth Airport: Summer Flights on Line, Litigation Continues
Lone Pine Teen Arrested for Under the Influence of Alcohol and Drugs