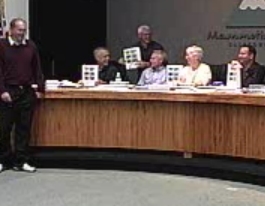 Here’s an amenity that speaks to tourism and to locals – an expansive system of trails.  In spite of serious financial troubles, the Town of Mammoth Lakes now has an official Trail System Master Plan. Trails in the plan will only be built when funding is available – public or private. Operation of the trail system will unfold under a joint partnership between the Town of Mammoth and the Inyo National Forest.

When they met Wednesday night, the Town Council voted unanimously to approve the master plan and the environmental document that goes with it.  To show the enormity of the accomplishment, John Wentworth of Mammoth Lakes Trails and Public Access (MLTPA) asked the Council if he could have his photo taken with them and the plan to prove to his relatives it had really happened.

It was MLTPA and others that went to work to raise money for the planning process, including an extensive public input process and environmental analysis. According to MLTPA, the funding includes $100,000 from Mammoth Mountain Ski Area, $100,000 from the Town of Mammoth Lakes, $25,000 from Cardinal Investments, $25,000 from Mammoth Crossing Development, $120,000 from a Sierra Nevada Conservancy grant.  SNC later forwarded another grant to the Town for CEQA.  The total financial commitment – roughly $555,000.

The planning work started in 2007.  The adopted trail system master plan now becomes the operative and legal document used to implement the Mammoth Lakes Trail System.  Implementation, officials underscore, depends on funding available.  According to MLTPA, the standards and guidelines in the plan can now be immediately enforced on any new developments.

The types of trails governed by the plan include paved multi-user paths, soft-surface trails, signage, bicycle racks, trailhead design and parking.  You can check out the plan on the town’s website or visit www.mltpa.org.

No prohibitions for skateboarders on Mammoth streets
LADWP refuses to reduce pumping, insists on backwards procedure