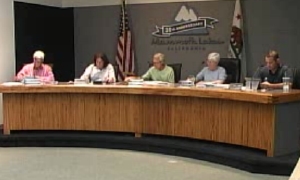 The powers-that-be in Washington reportedly want the project done. The Forest Service and BLM signed off on ORMAT geothermal’s environmental document in a record 7 days. In the face of an apparent fast track, plans for geothermal expansion and up to 16 new groundwater wells have caused grave concerns about impacts on Mammoth’s town water supply. The Town Council voted this week to sign a letter of support for Mammoth Community Water District over this troubling issue. The letter will go to legislators and agencies.

The Water District appealed the federal environmental approvals of ORMAT’s expansion plans. The Forest Service denied the appeal and BLM is considering it. The Air Pollution Control District has not approved ORMAT’s EIR and has held out for a monitoring and mitigation plan. Water District Board member Tom Cage said while renewable energy like geothermal is a good thing, not at the expense of Mammoth’s underground water supply. 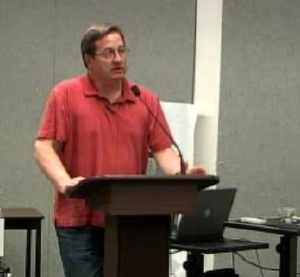 Cage said that ORMAT has had two new wells pumping since 2006 and there are measurable impacts. With 14 to 16 more new wells in the expansion plan, concerns are high. Cage emphasized that the District just wants a monitoring and mitigation plan to assure safe reliability of the water supply for years to come. He said without proper protection, the District will “fight this to the bitter end. We’re not going to be intimidated or bullied.” He called ORMAT less than a good neighbor and said they’re appealing their property tax assessments.

Cage also said ORMAT wants to take ten times the amount of water Mammoth uses in a year. He said the community’s water is in between ORMAT’s pumps and the surface. Water District Manager Patrick Hayes said ORMAT’s plans could pollute Mammoth’s water and puts the groundwater at risk. He said neither the Forest Service or BLM required monitoring or mitigation.

ORMAT’s wells and pipes would go around Shady Rest Park. Councilman Matthew Lehman said Mammoth had almost no say over the project that will mean a “pipe running through a recreation area.” John Wentworth of Mammoth Lakes Trails said while green energy needs to succeed, there is no mitigation for ORMAT’s recreational impacts. He said the company would send someone to a meeting of MLTPA April 24th. Wentworth said in Mammoth the door to being a good neighbor has never been closed.

Planning Commissioner Mickey Brown suggested calling ORMAT names, such as bully and plunderer, should be eliminated. Manager Hayes stood up for the seriousness of the issue. He said a BLM manager told him that from Washington “his bosses said they want the ORMAT project to go.” Hayes said, “Thankfully APCD Director Ted Schade is holding out for monitoring and mitigation.”

Planning Commissioner Dave Harvey said fear is being spread in town over this project and that he would like to see “people in the sand box play nice.” He faulted those who have denounced ORMAT for being a foreign company. “They have management in Reno,” he said. Harvey said the Water District should “raise the bar.” He supported work toward a geothermal heating district in town.

The Town Council stood firmly behind the Water District and its concerns. John Eastman said there are no solid answers about the dangers to Mammoth’s water. Said Eastman, “I’m not willing to risk the town water supply. Our local supply of drinking water is the single most important asset we have. I’m not willing to jeopardize it.” The Council voted unanimously to sign a letter of support.

tony, you have a lot of solid questions, please feel free to contact me with your additional questions and I will try to explain and if I can’t answer I will find someone who can. my number is 7609343399 think about the possibility of a pressure change that could suck… Read more »

I know that. In the winter when the lakes are frozen is when they rely on groundwater.That still doesn’t answer the question. The town’s water is hundreds of feet higher in elevation. Water is constantly moving downward sub surface.Taking/using water down on hwy 395 wont affect supplies for the town.… Read more »

Contact MCWD to find out about the impacts. The District uses a percentage of groundwater every year. Officials say ORMAT’s 16 new pumps may very well deplete the groundwater used by the town. They see it as a very great risk to Mammoth.
BK

Can someone explain to me how upstream surface water [MCWD’s main supplier from the lakes ]from almost 1500 feet higher in elevation and 5 miles away would be affected….is gravity different in that part of the east side?As for ground water in the winter, same question.

It’s the groundwater that would be affected. This year, when snowpack is low, the town will rely heavily upon it’s groundwater pumps and does to some extent
every year.
Benett Kessler

There are two sub basins in Mammoth. Most of Town water comes from southerly basin, partly because the north has contaminants from the volcanics – uranium, arsenic, etc… Theoretically there shouldn’t be much influence from the drilling and extraction on the Mammoth supply, as the southerly basin has a different… Read more »

Coso and Mammoth operate off two different types of mechanical systems.Yes, the water supply to the Coso plant was depleted, hence the need for an alternative water source.Water is the carry mechanism for that heat. The Mammoth issue is a depletion of heat and not water that’s why they are… Read more »

Thanks for the reply. I had no idea that the heat source could be depleted. I imagine a large formation of really hot magma or rocks. We never hear about those kinds of issues. We should….

That is interesting. I had not heard that explanation before. However, how does this not take more water out of the aquifer and risk the water supply Mammoth Lakes relies on?

Depletion of the groundwater is a serious issue. I’m surprised ORMAT has not addressed this obvious problem Geothermal generated electricity seems like a real win. The Earth is not going to cool — for all practical purposes — ever. And it’s a 24 hour a day — always on system.… Read more »

There are gas transfer methods that need to be further developed. Instead using water heated to steam to turn a steam turbine which in turn operates a big AC alternator, you can use heated gas to turn the equivalent of the front end of a gas turbine (jet) engine, which… Read more »

Wow, you guys are really behind the learning curve here. The Ormat, Mammoth plant has been using a binary ‘gas transfer’ plant since it was built. They do not flash the hot water into steam.

Chet: The ignorance comes from no way to learn the workings of the geothermal process. Education is one of the three pillars of this modern society. It is being neglected. Nobody wants to be ignorant, there is just no way to learn some things up here. I walked into the… Read more »

Coso flashes their hot water to steam and they lose some of that to atmosphere in the process. The Ormat plant keeps their hot water under pressure and pumps it back into the geothermal reservoir -no loss.

Property taxes aside, the write down in the value of their property can give them a reason “excuse” to expense their “loss” over a period of years on their Federal taxes.

They don’t offer you their water due to the fact that they are required to put it back in the ground.