Mammoth continues to support its elite runners. After recognizing Meb Keflezighi and Ryan Hall at the November 18 Town Council meeting for taking first and fourth place in the New York City Marathon, the Council approved a four-year contract with the Mammoth Track Club. The previous contract with Team Running USA, which has now morphed into the Mammoth Track Club, had expired. 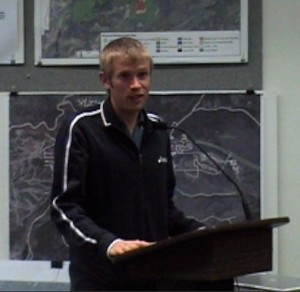 The amount of exposure athletes such as Hall and Keflezighi, as well as well-known Mammoth local Deena Kastor, give Mammoth made the contractual fees well worth it in the Council members’ minds.

During the television coverage of the New York City Marathon, Mammoth was mentioned approximately 14 times, according to Tourism and Recreation Director Danna Stroud. Marketing dollars in Mammoth are no where near substantial enough to be able to afford paid advertising that would compare to that, Stroud said. Hall and Kastor are also being featured in a Garmin advertising campaign with Mammoth playing a central role in the ads, again at no cost to the Town.

“That alone is well worth the $220,000 we’ll pay Mammoth Track Club over the four years,” stated Council member Skip Harvey.

Keflezighi was in Florida and enable to attend the meeting, but Hall spoke on behalf of both of them.

“Mammoth is the best place in the world to train,” Hall said. “Thanks for your continued support.”

We work to provide daily news to all of the Eastern Sierra, in the tradition of Eastern Sierra News Service and the Sierra Wave. We bring you daily happenings, local politics, crime, government dealings and fun stuff. Please contact us.
View all posts by News Staff →
Bishop Gunshot Leads To A Charge of Attempted Murder
Bureaucrat Beat: Grow Up, Cool Clint, Dapper David