A $40 million dollar lawsuit debt, possible bankruptcy and disruption of public services hang over the head of the Town of 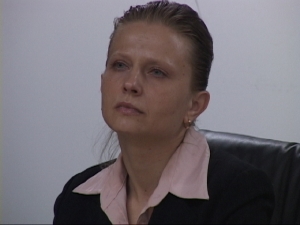 Town Manager Marianna Marysheva-Martinez credited the Town staff with much of the hard budget work.

Mammoth Lakes. These uncertainties continue even though the Town Council now moves forward to come up with a new fiscal year budget.

Town Manager Marianna Marysheva-Martinez guided the Council through a baseline budget Wednesday night. She said up front that the Town has no information on a settlement with Mammoth Lakes Land Acquisition, the Santa Monica firm that holds the airport lawsuit debt. In fact, later in her presentation, Martinez said that MLLA asked her to make a statement that they are “concerned about baseline budget decisions through June.”

With that cryptic statement in the background, council members forged ahead to make decisions on a baseline budget and budget principles as a prelude to more budget decisions June 1, with another budget meeting May 25.

Further discussions revealed that in addition to the some $2.5 million shortfall next fiscal year, other revenue streams could dry up, depending on state and education fund directions. One bit of good news – Police Chief Dan Watson confirmed that a state grant for his department will continue. That CalMet grant funds one full time police officer position.

Martinez assured council members future presentations will put everything on the table for consideration and numbers will reveal positive funds in each department. Mayor Skip Harvey said, “At least we understand where we are, and we’re not in a void or out of the loop any more.” Harvey also asked Town Attorney Andy Morris if Mammoth could delve deeper and tougher into Transient Occupancy Tax violations. Morris said staff would give the Town “a big tool box to work with.”

The four council members present, Rick Wood was absent, voted unanimously to support Martinez’s budget principles of fair reductions, cooperative decisions and increase of the reserve. They okayed new positions and cancellation of a previous position.

We work to provide daily news to all of the Eastern Sierra, in the tradition of Eastern Sierra News Service and the Sierra Wave. We bring you daily happenings, local politics, crime, government dealings and fun stuff. Please contact us.
View all posts by News Staff →
DFG request fails to win over Mono Supervisors
Mule Days executive board waits for state veterinary association update