The Mammoth Lakes group, Bear-With-Us, took their issues about wildlife to the Town Council Candidates. All eight 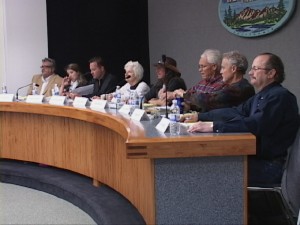 candidates enthusiastically supported Steve Searles’ services to Mammoth. Asked their opinions on killing problem bears in Mammoth, candidates’ responses ranged from no killing at all to only as a last resort.

Tony Barrett said, “I’m not in favor of killing bears, problem or not. If they’re a problem bear, then we should find a solution that does not involve killing.”

John Eastman said if Steve Searles is allowed to do his job, then “as has been the case in the past, there won’t be any ‘problem bears.’ It is my intent, if elected,” said Eastman, “to be one of the two Town Council representatives on the Wildlife Sub-Committee, and then become better schooled in the realities of Wildlife management.”

Matthew Lehman said, “We need to realize just how precious these animals are and we should not kill them unless absolutely necessary. I also have a strong irritation for ‘problem people’ killing innocent bears within town limits.”

Rick Wood said, “My opinion is that I am shocked that we could go several years without a killing and then have multiple killings in one year, because Steve Searles has not been given the tools and authority needed to manage wildlife.”

Kirk Stapp said, “If a bear is life threatening, then the bear has to be put down. If a bear is damaging property, Steve should be called first. Give Steve a chance to change the bears’ behavior.”

Dawn Vereuck said, “I think it’s deplorable. I understand the concern about public safety, but the so-called ‘problem bears’ are a problem because of us. We need to enforce stiff penalties for those who violate our trash/ do not feed the bears ordinance.”

Sharon Clark said, “The only ‘problem bears’ are those that have become accustomed to finding and becoming dependent on human food. We have a responsibility, as Steve often says, to train humans NOT to feed wildlife and to make garbage unavailable.” Clark said as a last resort she would agree to elimination of problem bears.

Allen Blumer said, “I think it’s a disgrace and waste that Fish and Game goes behind the backs of our town and MLPD to sanction bears. It ends in negative publicity.” Blumer said that’s why he’s pursuing grants to create Sierra Wildlife Sanctuary.

We’ll bring you more responses on this issue in future web stories.

We work to provide daily news to all of the Eastern Sierra, in the tradition of Eastern Sierra News Service and the Sierra Wave. We bring you daily happenings, local politics, crime, government dealings and fun stuff. Please contact us.
View all posts by News Staff →
Forum Question about a Skull Discovery Leads to Officer’s Response
Two Young Bishop Residents Arrested in Stolen Jeep Case