37% of the workforce commutes to Mammoth Lakes. 170 more housing units are needed, according to a new housing needs assessment.  Some Mammoth Town Council members expressed their views on affordable housing.  One official called housing “an extra”,  not a necessity.

All of this came up at the last Mammoth Town Council meeting when Mammoth Lakes Housing Director Pam Hennarty talked about the new housing study.  She said the study “reaffirmed that there is still an affordable housing need.”  With unemployment and a bad economy, the situation has worsened, she said.

The study revealed that low income residents often pay as much as 35% of their income on housing.  600 households are somewhat or very dissatisfied with their housing.  Survey responses say units 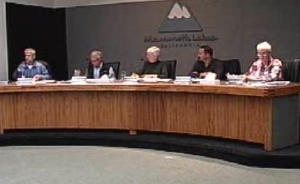 need repairs or are poorly maintained.  575 households said they are overcrowded.

Councilmen Skip Harvey and Rick Wood commended Hennarty for a good job and supported the need for government-supported housing units.  Councilman Wood pointed out that in 2010, the state average annual wage was $53,000 while in Mono County it was $33,000.

Wood also pointed to the study survey and the fact that half of employers who responded felt affordable housing was one of the most or the most serious problems in the community.  He said housing demand will continue to go up.  Councilman Wood said that without adequate housing, the Town can not accommodate the workers who make the beds, do the dishes and meet other needs for tourists.

Councilman Matthew Lehman was less generous in his view.  He said, “I’m one of those who thinks housing is an extra.  I personally feel that government should take as small a role as possible and leave it to the capitalist market.”

Lehman claimed that private developers are not willing to build affordable housing if they have to compete with government.  He implied that the Mammoth Lakes Housing survey was manipulated to get certain results.  Lehman added that 10% of responders are frustrated about illegal immigrants in Mammoth.

Hennarty said that she and her staff will work on a housing strategy which will go to public meetings for input in the new year.