News at Mammoth Unified School District was not as cheery as it was a little over three months ago when Superintendent Dr. Frank Romero and MUSD Business Manager Jim Maxey announced they had been able to cover a looming $300,000 deficit in the school district’s budget. This time around the deficit is closer to $800,000 and there are no hidden dollars that will magically appear to save the district from making drastic cuts. All of this came out at a special meeting of the school board. 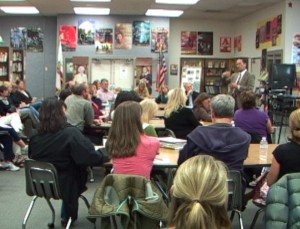 “We have to come up with some reductions to the budget or we won’t make it,” Romero explained to a group of concerned parents and teachers that gathered at the high school library on June 11.

MUSD is looking to lose approximately $618,000 in categoricals, which are dollars paid by the state. On top of that, the state is cutting 65 percent of home-to-school transportation funds, which would be an additional $180,000 hit to the Mammoth district. What’s more, according to Maxey and Romero the state could decide to take even more at any time.

The failure of the majority of the measures on the May 19 ballot added to the severity of the situation because it caused the state to have to go back and look for other ways to cut another $24.3 million from the budget. They decided that basic aid schools, of which MUSD is one, should take their fair share of hits in their budget to put them on a level playing field with revenue limited schools. All schools are funded by state funds and property taxes. Basic aid schools have an excess of property tax funds to draw from.

After reviewing the budget, Romero put some big ticket items in front of the School Board for cutting consideration. These items included cutting athletics, cutting home-to-school transportation for all students except special education, and eliminating summer school at Mammoth Elementary, among others. At this time, pink slips cannot be factored into the cutting equation due to the to state law that only states revenue limited schools can administer a second round of layoffs in one year. The date for round two of pink slips is August 15, and according to School Board member Greg Newbry, the law may be changed before then, allowing districts like MUSD to make some cuts to staff.

Romero explained that this budget problem was going to be long-term, so the group needed to look at long-term solutions. The district cannot just use its reserve because then when more cuts come around next year, there will be nothing to draw from and hits to school programs will be even bigger. Plus, at this time the state requires schools to carry a 3 percent reserve, although that law may be another that could be changing.

The group at the meeting prioritized the list of cuts that Romero put in front of them and added some ideas of their own. They suggested not cutting anything without having a back-up plan in place. They put cutting home-to-school transportation and placing a hiring freeze on all staff at the top of the list, which would save about $500,000.

Summer school at MES is expected to start as scheduled on Monday, June 15. However, if the Board decides to cut that program at their June 22 meeting, classes may be stopped after only a week or two.

The Board is expected to review the full budget at their June 22 meeting. According to Maxey, the budget will show a huge drawdown in the district’s reserve. The Board will have to vote on the priority list to determine how to backfill that reserve.

We work to provide daily news to all of the Eastern Sierra, in the tradition of Eastern Sierra News Service and the Sierra Wave. We bring you daily happenings, local politics, crime, government dealings and fun stuff. Please contact us.
View all posts by News Staff →
Schools Reinstate Teachers, Brace for More Cuts
Bureaucrat Beat: Inyo Irony, Clunker Cash, and Mono Magic